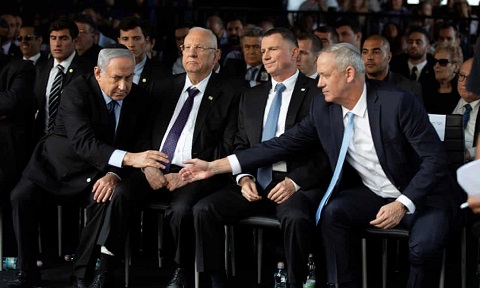 Benny Gantz, leader of the Blue and White party, abandoned the central plank of his platform at the weekend that he would never sit in a coalition with Benjamin Netanyahu, who has led Israel continuously for the past 11 years.

A former military general, Gantz justified his dramatic change of course under cover of claims that Israel needed an "emergency" unity government to deal with the coronavirus epidemic.

Israel's government has been paralysed by three elections in which neither Netanyahu's bloc of ultra-nationalist and religious parties, nor Gantz's anti-Netanyahu bloc of secular, largely right-wing parties, could muster a parliamentary majority.

Gantz argued it was time to set aside differences, ignore Netanyahu's impending criminal trial for corruption and rally against the virus. The about-face means that Netanyahu will remain prime minister for at least the next 18 months and possibly longer if he makes good on his well-earned reputation for subterfuge and double-dealing.

Gantz has said he is "at peace" with his decision. "There was no other alternative route, and had there been, we would have taken it," he told supporters stunned by his decision.

The reality is rather different.

Gantz actually enjoyed a narrow majority of legislators in parliament after the 2 March election. As a result, President Reuven Rivlin had tasked him last week with forming a government. His majority bloc was resolutely opposed to Netanyahu as prime minister, accusing him of increasingly authoritarian rule and pointing to his indictment for corruption.

The bloc also opposed Netanyahu's cultivation of a new, more religious kind of politics, in which extremist rabbis and settler leaders have moved ever closer to centre-stage.

So why is Gantz now sitting in a government with a man he supposedly despises one that Haaretz this week called "the king of corruption" rather than leading a majority government of his own?

There is only one honest answer: racism. Gantz and his bloc may passionately hate Netanyahu and his megalomaniacal style of politics, but they detest with even greater intensity, it seems, one faction of their majority bloc: the Joint List.

The Joint List, which currently has a record 15 seats in parliament, is an alliance of four parties that represent the fifth of the country's population who are Palestinian by heritage.

They are the remnants inside Israel of the Palestinian people, most of whom were driven from their lands in 1948 to create a "Jewish state" on the ruins of their homeland, an event known to Palestinians as the Nakba, or catastrophe.

Today, some 1.8 million Palestinians have Israeli citizenship and are entitled to vote in Israeli elections. Nonetheless, theirs is a very degraded form of citizenship. They enjoy far fewer rights that Jewish citizens, especially in language, land and housing rights.

After many months of Gantz and his allies denouncing Netanyahu as corrupt, what lesson is the Palestinian minority supposed to draw from his decision now to abandon his own bloc in favour of Netanyahu?

Related Topic(s): Benjamin Netanyahu; Corona Virus Coronavirus Covid-19; Israel; Israel Firsters; Israeli Settlements; Israeli-palestinian; Palestinian; Prime Minister Benjamin Netanyahu, Add Tags
Add to My Group(s)
Go To Commenting
The views expressed herein are the sole responsibility of the author and do not necessarily reflect those of this website or its editors.