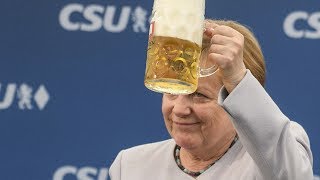 German Chancellor Angela Merkel after stating, "We Europeans must take our destiny in our own hands".

Reading Finian Cunningham's latest, "New US sanctions...Bring it on" [1] , where he highlights the latest sanctions to be imposed on Russia voted on by the US House, soon to be passed by the Senate and all but assured signed into law by President Trump. All of it as Cunningham states, "collectively insane".

Do the rest of the world see it as well?

But it is Germany and France as the major nations in Europe who hold the key. They recognize these sanctions impact them directly most importantly in their trade and energy sectors with Russia.

In early June German Chancellor Angela Merkel indirectly put the onus on the US saying, "The times in which we can entirely depend on others are gone. We Europeans must take our destiny in our own hands".

In late May new French President Emmanuel Macron meeting for the first time with Russian President Vladimir Putin at the Versailles Palace said, "Nothing can be tackled without dialogue with Russia"-this in reference to Syria and Ukraine. Then Macron said, "Working with Russia reinforces our partnership with Russia"...

Such words by Merkel and Macron surely weren't written or approved by "Official" Washington. But they do reveal unmistakable fissures in the western alliance that can't be dismissed as mere rhetoric.

These countries are part of NATO and the EU. They've dutifully followed the US in war-Syria, Libya, acquiesced in the US inspired coup in Ukraine in February 2014-though putting the blame on Russia-and gone along with previous US sanctions on Russia-though now balking loudly against the latest round targeting Russia.

But with madness gripping "official" Washington Germany and France must realize continuing on this insane road can only bring them eventual disaster.

Germany and France along with Italy, Spain, Greece, NATO member Turkey all recognize the strong economic ties between Russia and China particularly that country's "Belt and road initiative". The BRI is the economic wave of the future and Europe recognizes it too must take part to further their own trade, energy and economic development.

Europe's future economic and trade is naturally eastward with Russia and China. Just look at a map. It's not with the US.

Chaos and instability define US policy and actions all over the world. It all goes to benefit the defense industry, the big banks, big oil and gas along with other big corporate interests serving the richest 1%.

The US is burdened with $20 trillion in debt, infrastructure crumbling nationwide, a once dynamic middle class in decline from job losses and the resultant economic hardship, domestic manufacturing shuttered and shipped off to 3rd world countries with only the dollar as the world's reserve currency undergirding this rickety structure from collapsing on itself.

Retired. The author of "DECEIT AND EXCESS IN AMERICA, HOW THE MONEYED INTERESTS HAVE STOLEN AMERICA AND HOW WE CAN GET IT BACK", Authorhouse, 2009
Related Topic(s): Economic; Sanctions; Senate, Add Tags
Add to My Group(s)
Go To Commenting
The views expressed herein are the sole responsibility of the author and do not necessarily reflect those of this website or its editors.