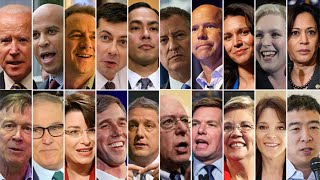 Four hours of nationally televised debates Wednesday and Thursday among 20 Democratic presidential candidates demonstrated the gigantic disconnect between the claims of this pro-war, pro-corporate party to be driven by concerns for the well-being of working people and the reality of poverty and oppression in America, for which the Democratic Party is no less responsible than the Republicans.

The stage-managed spectacle mounted by NBC marked the formal beginning of an electoral process dominated by big money and thoroughly manipulated by the corporate-controlled media.

The attempt to contain the growing left-wing opposition in the working class and channel it behind the second oldest capitalist party in the world necessarily assumed the form of lies and demagogy. For the most part, the vying politicians, all of them in the top 10 percent on the income ladder, made promises to provide healthcare, jobs, decent schools, tuition-free college and a clean environment for all, knowing full well they had no intention of carrying them out.

No one -- neither the millionaire media talking heads asking the questions nor the candidates -- dared to mention the fact that that Democratic Party has just voted to give Trump an additional $4.9 billion to round up, detain and torture hundreds of thousands of immigrants, including children, in the growing network of concentration camps being set up within the US. Facts, as they say, are stubborn things, and this one demonstrates the complicity of the Democratic Party in the fascistic policies of the Trump administration.

The second night of the debate featured the front-runners, former Vice President Joe Biden and Vermont Senator Bernie Sanders. Biden has a long record of reactionary politics, including in the Obama administration. Sanders is continuing in this election his role in 2016 of channeling growing support for socialism into the framework of a right-wing party.

The fraud of a "progressive" Democratic Party and presidential candidate was summed up in the near-universal declaration of the media that Senator Kamala Harris had emerged as the clear winner, part of a coordinated effort to promote her candidacy. The African-American senator was lauded for attacking Biden for statements boasting of his ability in the past to collaborate with segregationist senators and his past opposition to busing for school integration.

It was Harris who adopted the most transparently bogus posture of left-radicalism in Thursday night's debate, repeatedly declaring her agreement with Bernie Sanders and raising her hand, along with Sanders, to support the abolition of private health insurance in favor of a single-payer system. By Friday morning, however, she had reversed that stand, claiming she had "misheard" the question and declaring her support for the continuation of private insurance.

Harris climbed to the Senate by serving for years in the Bay Area of California as a law-and-order district attorney and state attorney general, defending police killers and bankers engaged in foreclosure fraud, including Trump's current treasury secretary, Steven Mnuchin. A member of the Senate Intelligence Committee, she has been among the most rabid of Democrats in attacking Trump as a stooge of Russian President Putin. In Thursday's debate, her main foray into foreign policy was to denounce Trump for being soft on Putin and North Korean leader Kim Jong-un.

She is being promoted most enthusiastically by those sections of the ruling class, whose views are promoted by the New York Times, who want the Democratic campaign to be dominated by racial and gender politics so as to mobilize the party's wealthy upper-middle class base and divert and divide the mass working class anger over social inequality.

Many of the candidates fondly recalled the Obama administration. But those eight years saw the greatest transfer of wealth from working people to the super-rich in American history. The pace was set by the initial $700 billion bailout of Wall Street, which was expanded to uncounted trillions in the course of 2009, combined with the bailout of the auto companies at the expense of the autoworkers, who suffered massive cuts in benefits and a 50 percent cut in pay for new hires, rubber-stamped by the United Auto Workers.

The Obama administration also deported more immigrants than any other, a fact that was raised in a question to Vice President Biden, who confined himself to empty declarations of sympathy for the victims of Trump's persecution, while denying any comparison between Trump and Obama.

Senator Michael Bennet of Colorado attacked Biden for claiming credit for a bipartisan budget deal in 2011 with Republican Senate leader Mitch McConnell. Far from a genuine compromise, he said, the deal "was a complete victory for the Tea Party. It extended the Bush tax cuts permanently," as well as putting in place major cuts in social spending which continue to this day. Bennet neglected to mention that he had voted for the deal himself when it passed the Senate by a huge majority.

It was remarkable, under conditions where President Trump himself declared that the United States was only 10 minutes away from launching a major assault on Iran earlier this month, that the 20 Democratic candidates spent almost no time discussing foreign policy.

In the course of four hours, there were only a few minutes devoted to the world outside the United States. The silence on the rest of the world cannot be dismissed as mere parochialism.

Patrick Martin writes for the World Socialist Website (wsws.org), a forum for socialist ideas & analysis & published by the International Committee of the Fourth International (ICFI).
Related Topic(s): Compromise; Debate; Democratic Policy; Opposition; Social Democracy; Socialism, Add Tags
Add to My Group(s)
Go To Commenting
The views expressed herein are the sole responsibility of the author and do not necessarily reflect those of this website or its editors.