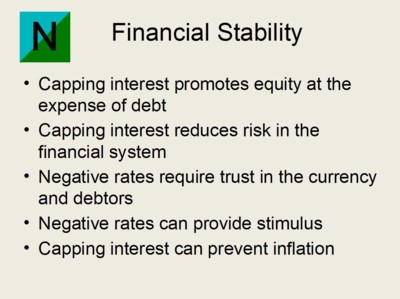 The financial crisis of 2008 brought a renewed interest in Minsky's Financial Instability Hypothesis. It states that capitalist economies are inherently unstable due to the inner workings of the financial system.1 Minsky ignored interest as the underlying cause of financial instability and proposed that the government should manage the problem.

It is seen as a key public interest that the economy doesn't suffer from financial instability in the private sector. Only, managing that problem can cause moral hazard leading to private gains backed by public losses.

On the most fundamental level financial instability is caused by leverage and interest on debts. Incomes vary while interest payments are fixed.2 In an economic downturn this can easily escalate into a financial crisis as financial institutions are even more leveraged than other corporations. A possible benefit of negative interest rates is therefore financial stability.

It may be time to introduce the Financial Stability Hypothesis. It states that once interest rates are negative and positive interest rates are not allowed, a set of stabilising mechanisms can kick in that make the capitalist economy inherently stable. As a result governments and central banks may have fewer reasons to interfere so fiscal and monetary policies may become obsolete.

Minsky argued that when the economy is doing fine, market participants become optimistic and complacent so that leverage and risk in the financial system increase. When the economy slows down, defaults on debts and interest payments can escalate into a financial crisis.1

But what would happen when interest rates are negative and positive interest rates on money and debts are not allowed? The economy could become inherently stable because of the following stabilising mechanisms:

⦁ Interest is also a reward for risk so capping interest rates on debts to zero can reduce high risk debt in the financial system. Risky ventures may need to be financed with equity rather than debt.

⦁ Consumer debt may be constrained as usurious lending like credit card debt will be phased out. This can stabilise and increase consumer spending as consumers don't have to pay interest.

⦁ Negative interest rates require trust in the currency and debtors. There could be an incentive for governments to have their finances in order. This isn't austerity as governments receive interest on their debts.

⦁ In case of deflation, interest rates go deeper into negative territory. This is likely to cause a stimulus so that the economy improves and deflation can be halted.

It appears that negative interest rates and a ban on positive interest rates on money and debts can stabilise and improve a debt-burdened economy. Inflation is expected to be low and there could even be deflation. It also appears that governments and central banks don't have to play an active role in managing the economy using fiscal and monetary policies.

The key to making a usury-free financial system feasible is accepting that not every demand for a loan needs to be satisfied, most notably the demand for loans that have the potential of destabilising the financial system, and that in order to constrain inflation loan demands must be discarded rather than fulfilled at a higher interest rate.

What a usury-free financial system might look like, and what challenges may lie ahead, is discussed the paper Feasibility Of Interest-free Demurrage Currency that can be found via the link below:

Bart klein Ikink was born in a village in the East of the Netherlands and has lived in this region as a child. He studied Business and Information Technology and Philosophy of Science, Technology and Society in Enschede, which is also in the (more...)

Related Topic(s): Debt; Deflation; Equity; Financial Crisis Inquiry Commission; Financial Regulation; Inflation; Leverage; Usury, Add Tags
Add to My Group(s)
Go To Commenting
The views expressed herein are the sole responsibility of the author and do not necessarily reflect those of this website or its editors.

Multiculturalism Is One Of The Greatest Successes Of All Time

A tale of two economic forces