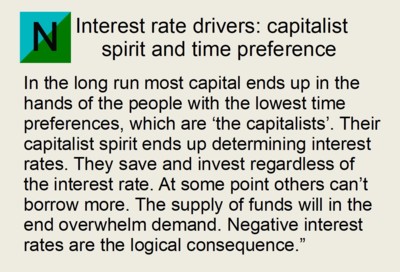 Negative interest rates are coming. And they may be here to stay. There is a reason why that might be so. To explain the situation I make use of simplification for clarity's sake. Basically this is a tale of two opposing economic forces: capitalist spirit versus time preference. And basically, there are two types of people: ordinary people and capitalists.1

Ordinary people suffer from a condition called 'time preference'. It makes them spend their money on frivolous items sooner rather than later. Their money is often gone before the month is. And they can't help themselves. Ordinary people will only forego stuff in the present if they can get more stuff in the future. Hence, interest rates need to be positive to make them save.

Capitalists on the other hand are special people. They suffer from a condition called 'capitalist spirit'. They believe that money spent of frivolous items is money wasted because if you invest it instead, you end up with more money in the future that you can invest again. They keep on saving and investing even when interest rates are low. They can't help themselves either.

There is a problem with this. For most of history, returns on capital were higher than the economic growth rate.2 This can't continue forever because returns on capital would take a growing portion of national income. In the past this issue was often resolved by economic depressions and wars that destroyed a lot of capital. The stagflation of the 1970s had a similar effect. But why destroy capital if it can be useful?

Negative interest rates are not only a sign of capitalists having difficulty finding profitable investments, but also a sign of trust in the financial system, central banks and borrowers, because investors prefer losing money on government bonds and bank accounts to buying gold. This is an issue many economists seem to ignore, most notably those from the Austrian School.

Gold may rise in value, but perhaps not as much as many gold bugs think. Fiat currency is the most liquid asset and prices are expressed in fiat currency, so that people would prefer fiat currency because it is more predictable what it will buy. And negative interest rates suggest deflationary conditions so that fiat currency may not loose value in the future as much as it did in the past.

Prices may drop because interest costs are in every product and service we buy, in the rents and mortgages we pay as well as in taxes as governments pay interest on their debts too. Negative interest rates require trust in the currency and the debtor. Many interest rates in Europe are already negative for a while as several European countries have budget surpluses.

Soon you may get money from the bank for having a mortgage. It is already happening in Denmark.3 And the super-rich may end up paying for it. That is already happening in Switzerland.4 Don't think this is just temporary. We may never see positive interest rates again. I have researched negative interest rates for more than decade. This research can be found on http://www.naturalmoney.org.

Bart klein Ikink was born in a village in the East of the Netherlands and has lived in this region as a child. He studied Business and Information Technology and Philosophy of Science, Technology and Society in Enschede, which is also in the (more...)

Related Topic(s): Banks; Budget; Debt; Economic Models; Economic Systems; Financial, Add Tags
Add to My Group(s)
Go To Commenting
The views expressed herein are the sole responsibility of the author and do not necessarily reflect those of this website or its editors.

Multiculturalism Is One Of The Greatest Successes Of All Time

A tale of two economic forces