The article was originally posted at the blog Fire on the Mountain. It is re-published with permission. 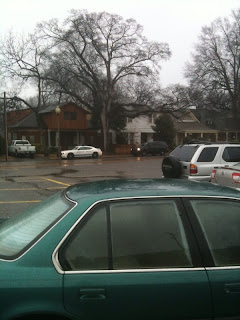 
January 25th was a national day of action to protest the ongoing FBI/Grand Jury witch-hunt against anti-war and solidarity activists in the Midwest.

We in Memphis, like people in nearly 50 cities around the country, felt it important to do our part. We had no idea we ourselves would wind up in the middle of what appears to have been a surreal exercise in state overkill directed at free speech and political activism.

We had planned an indoor event at the offices of the Mid-South Peace and Justice Center (MSPJC, long housed at the First Congregational Church) from 4 until 6 PM. The featured activity was to be folks present filling out official Freedom of Information Act forms requesting copies of any FBI reports on them.

Things started getting strange around 2:30. Three men in suits identifying themselves as FBI agents dropped by the MSPJC offices. MSPJC's organizing coordinator posted to Facebook: "Just had a visit from the FBI.......they claimed that they wanted to alert me that some Anti War activist were planning something around my building....I paused and tried not to laugh..when i said..."Uh..yes sir..these are the offices of the Mid-South PEACE and Justice Center." They promptly left...."

At 3:00, organizers, notified of the FBI drop-in, showed up an hour early for set up. It was kind of hard to miss the marked Memphis Police Department cruisers patrolling the area, to say nothing of the six identical Black SUVs with heavily tinted windows parked in a perimeter around the church.

At 5:00 a dozen or so of us armed with phone cameras and two flip cams headed out to face down th' popo. We were joined by veteran Memphis newsman Marc Parrasquia, who knows a little something about police spying--his stories for the Memphis Commercial Appeal last year exposed Earnest Withers, a beloved Civil Rights Movement photographer, as an FBI snitch.

We confronted the commanding officer on the scene. He informed us that they were "a support unit" sent to "protect us" and mentioned something about "traffic." We told him it was an indoor event, needed neither security nor traffic direction, and asked him to leave. He refused, while denying any knowledge of the earlier FBI visit. All the cops had the Cobra insignia of the MPD Tact Unit [sic]! Described on MPD's website, the Tact Unit is an "elite unit, specially trained to respond to various emergency situations, is responsible for handling barricade situations, hostage rescues, counter terrorism, and high risk felony apprehensions."

We demanded that his supervisor come down. The tactical team supervisor scurried down to the scene, claiming to be unaware of the FBI visit and said "a concerned citizen" had made some sort of call to the Union Avenue station and they had been dispatched to "protect" the action. MSPJC staff made calls to the mayor's office, and ultimately spoke at length to the assistant police chief, who admitted having given the order to dispatch the small-arms carrying unit. He also claimed to know nothing about the FBI visit and gave the same story about the call into the precinct.

While all this was unfolding we learned that Shelby County sheriffs had pushed into at least two homes of progressive Memphis area activists earlier that day, citing (but not showing) warrants for individuals. In one case not only had the individual not lived there in years, the cops felt it necessary to go room to room with guns drawn for a "failure to appear" charge in traffic court.

One very good result was broad media coverage. Right from the start of the madness, we began re-calling press outlets which had responded to our earlier generic notifications and followup calls about the event along the lines of "Ho-hum. Well, maybe, but don't you know there's a snow emergency on?" The magic letters FBI turned out not only the Commercial Appeal but also the local ABC and Fox affiliates, all of which ran stories on the confrontation. And more media calls are coming in today.
The problem ain't a mis-use of law enforcement

At the moment, we are demanding further information about the nature of the mystery phone call (which raises the interesting question of what exactly does one say in a phone call to a precinct cop that turns out the Tact Unit normally reserved for scenes out of a Die Hard movie) and contacts between the FBI, the MPD and the Shelby County Sheriffs Office. We are also collecting further information on the raids and other actions law enforcement made or may have made at other Memphis area activists and exploring our legal options.

We are also beginning deeper investigation of the daily actions of the Tact Team and local law enforcement generally. When they aren't staked outside a church to provide surveillance on a group of mostly white anti-war activists, which communities in our city are they harassing? Are these psycho-drama style tactics their usual MO? In the end, the issue isn't if these cops could have been better used elsewhere in the city during a rare snowfall, but if the resources that get spent equipping these paramilitary thugs could be better used by our communities.

Until and unless we learn something different, the progressive community in Memphis is taking this as one more example of the ramped-up repression of free speech and assembly in this country. And a challenge to unite in earnest with struggles in our city against wide-spread police brutality and daily police oppression. We are determined not to be intimidated.

Kevin Gosztola is managing editor of Shadowproof Press. He also produces and co-hosts the weekly podcast, "Unauthorized Disclosure." He was an editor for OpEdNews.com
Related Topic(s): Activism; Fbi Raids; Federal Agency FBI; Memphis; Peace Activism; Peace_War; Police; SWAT Teams, Add Tags
Add to My Group(s)
Go To Commenting
The views expressed herein are the sole responsibility of the author and do not necessarily reflect those of this website or its editors.