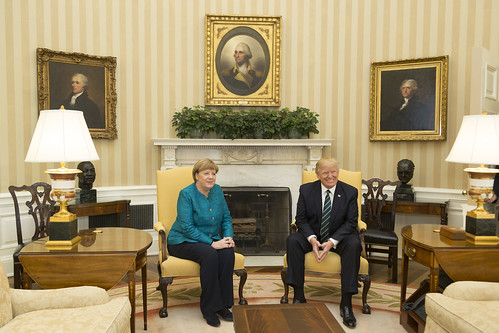 Crucial developments in Washington, Brussels, Virginia and St. Petersburg these last few days may offer us serious clues on where we are now heading -- geopolitically and geoeconomically.

Let's start with a neo-apocalyptic stream of analysis ruling that President Trump pulling out of the Paris climate accords has plunged the West into a conflict deeper than any since WWII.

What was described as a "historic blunder" by one of the negotiators of the Paris accords also managed to draw a powerful rebuke -- and in English, too -- from French President Emmanuel Macron.

German chancellor Angela Merkel, at the G7 in Taormina, had already warned Trump that "the field would be left to the Chinese" in case of a US pull out.

And indeed that came as a heavenly PR coup for Chinese Premier Li Keqiang, who met with Merkel in Berlin and a gaggle of Eurocrats in Brussels.

China is the EU's second-biggest trading partner after the US. A joint communique' -- their first ever on public policy -- at the China-EU summit declared climate change "an imperative more than ever." Beijing and Brussels pledged to cut back on fossil fuels, develop additional green technology, and help raise US$100 billion a year by 2020 to help the Global South cut emissions.

For Beijing, leadership in the fight against climate change now translates as an unprecedented accumulation of political capital. Add to that its ambitious expanse New Silk Roads project -- which has been renamed the Belt and Road Initiative (BRI) -- and we have China positioning itself to lead on both the multilateral and environmental fronts.

This happens as China's own emissions have been falling since 2013-- in parallel with installing enough solar panels to cover three football pitches every single hour of the year. China may remain the world's leading polluter, but at the same time it advances inexorably as the world's top manufacturer, developer and exporter of renewable energy.

As the New Silk Roads spread their infrastructural tentacles towards the EU, Chinese investment is bound to shoot up way beyond the --35 billion for 2016.

Related Topic(s): China; Donald Trump; Paris Climate Accords, Add Tags
Add to My Group(s)
Go To Commenting
The views expressed herein are the sole responsibility of the author and do not necessarily reflect those of this website or its editors.