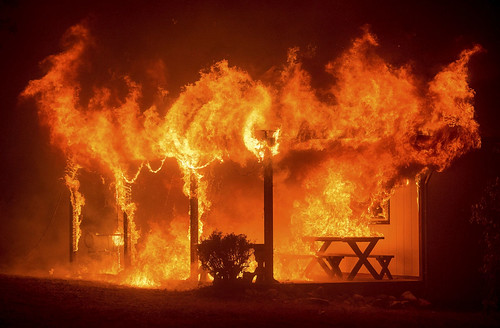 Power companies have two jobs: Keep the lights on and don't kill your customers. Pacific Gas and Electric Co. of Northern California flunks on both counts.

So how can California put an end to PG&E's reign of error?

The answer: Make this so-called "public utility" into a true public system -- a customer-owned power cooperative, a plan proposed by the city of San Jose. Currently, the only things "public" about PG&E are the bills the public pays and the charred homes and bodies this bankrupt beast leaves behind.

But how can the public take ownership without busting government coffers?

The way Gordon Gekko did it in "Wall Street": through a hostile takeover bid for PG&E's stock -- now bouncing on the floor at about $4 per share.

It's been done before, in New York.

For decades, Long Island Lighting Co., LILCO, like PG&E, left millions of its customers in the dark, endangered their safety and emptied their pockets with monstrously high electric bills. Then, in 1998, the customers seized ownership of the renegade utility -- at low cost, below its book value.

In 1981, as executive director of the state legislature's Science and Technology Commission, I was tasked with drafting a law that would allow customers to buy out this dangerous power company cheaply.

Our solution was inventive. LILCO's stock, like PG&E's, was in the toilet, trading at a fraction of its book value -- that is, way less than the cost of its lines and equipment. If corporate raiders can take over companies cheap to reap giant profits, why couldn't the state do a hostile takeover to keep the public safe and reduce electric bills?

My agency drafted, and the legislature passed, a law permitting the state to make a hostile tender offer for LILCO's stock.

To keep the utility's stock from soaring on the takeover offer, I also drafted civil racketeering (RICO) charges that were filed by the state and local government. The complaint cited years of the company extracting billions from its captive customers on false claims.

Likewise, California has a good cause to take legal action against PG&E on behalf of its customers. The still-blazing Kincade fire was, the company all but admits, caused by failure on a transmission line the company had promised for two years to fix by this April. It didn't.

Greg Palast's investigative reports appear in Rolling Stone, the Guardian and on BBC Television. His latest film, The Best Democracy Money Can Buy, on how Donald Trump stole the 2016 election, is available on Amazon. Palast is Patron of the Trinity (more...)
Related Topic(s): Democracy; Fire; Pollution; Regulators; Socialism, Add Tags
Add to My Group(s)
Go To Commenting
The views expressed herein are the sole responsibility of the author and do not necessarily reflect those of this website or its editors.