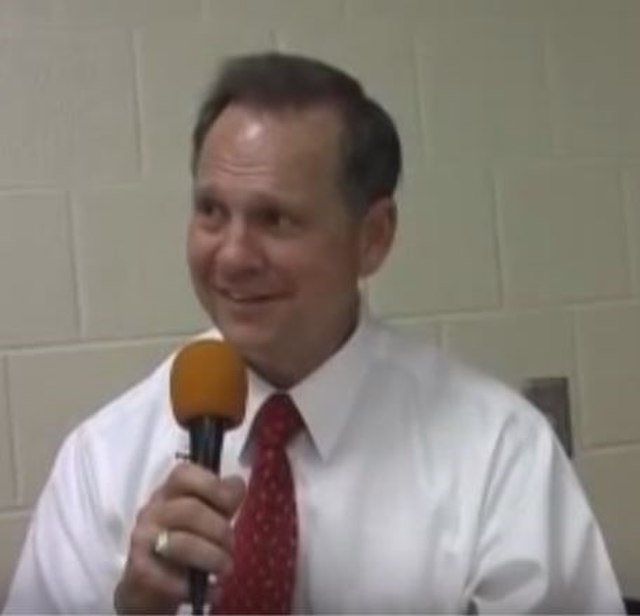 It's hard to be objective about Roy Moore. Ever since his days as circuit judge of Etowah County, Alabama, he's been a hero to religious conservatives and the bane of civil libertarians. The former powered his two elections to the office of Chief Justice of the Alabama Supreme Court, on his promise to "return God to our public life and restore the moral foundation of our law." The latter effected his two removals from that office over his insistence that his religious beliefs trump the law (including the US Constitution).

That Moore is one of America's most controversial political figures shouldn't distract us from the most obvious and important question concerning the latest controversy: Did he, as alleged in a Washington Postexpose, engage in sexual activities with a 14-year-old girl (and other minors) while he was a thirty-something prosecutor?

Moore's enemies and the Democratic Party want it to be true. They weren't able to beat him at the ballot box in either of his two runs for Chief Justice, or in this year's Republican primary for US Senate. And removing a US Senator is harder than beating him in an election before he becomes one.

Moore's supporters want it to be false -- not just because election results depend on it, but because no one likes to learn he or she was conned by a supposed moral exemplar.

The Republican Party NEEDS the allegations to be false. Unless they collapse in a spectacular manner, the GOP loses. They lose a Senate seat if Moore loses the election. If he wins it, the party's Senate majority is faced with the choice of seating him and thereby publicly owning his alleged sins, or refusing to seat him and facing the ire of his supporters. If the allegations stand up at all, that thin Republican Senate majority is in danger next November either way.

The most sickening aspect of this whole thing is that some of Moore's supporters tell us the truth doesn't matter -- that it was a long time ago, that he isn't accused of forcibly raping anyone, and that hey, the Virgin Mary was young too, so no biggie. That dog won't hunt.

I personally loathe Roy Moore, and don't hold with a "presumption of innocence until the charges are proven beyond a reasonable doubt" standard when it comes to personal reputation. Public opinion is not a criminal court proceeding. My personal biases push me toward believing Moore's accusers.

On the other hand, the timing is suspspect. Why are we only now hearing things that, if true, would have sent him home in disgrace, possibly even to prison, at previous points during his long career?

That it took a personal scandal to slow Moore's advance toward Capitol Hill is the real embarrassment here. Roy Moore should not be elected to the US Senate because he opposes the values the United States is supposedly founded upon. Hopefully Alabama voters will make the election about that and write in Libertarian candidate Ron Bishop.

Related Topic(s): Judge Roy Moore, Add Tags
Add to My Group(s)
Go To Commenting
The views expressed herein are the sole responsibility of the author and do not necessarily reflect those of this website or its editors.