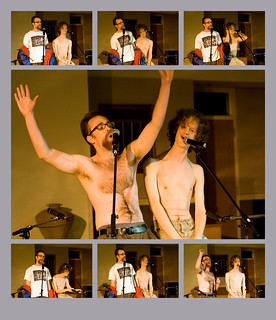 Look out, E.T., the earthling astronomers are searching for you. Though they've found no extraterrestrial life so far, they have confirmed 950 exoplanets, which are planets in other star systems, and they say some are habitable.

Look out, creationists. Any life astronomers detect would be life the Bible neglected to mention. The World Economic Forum cautions in its Global Risks 2013 report, "The discovery of even simple life would fuel speculation about the existence of other intelligent beings and challenge many assumptions that underpin human philosophy and religion." Some online commenters go further and claim creationists would face extinction.

I disagree. Sure, the news would generate excitement. Count me in; I grew up with my mind in space. No dome-headed, spindly-bodied astronerds for me--I imagined sophisticated octopi roaming purple seas and wondered if land creatures could grow wheels instead of legs. But don't expect vivid images. Astronomers will not soon see life or know what form it takes. What they could detect would leave creationism undisturbed.

If the search comes up empty, that too would settle nothing, but only mean that rough methods applied at great distances failed to detect life in one tiny corner of the universe. Astronomers would hone their methods and go on trying.

Contact with intelligent extraterrestrials would challenge creationism, but few other religious beliefs. Many Jewish, Christian, and Muslim theologians have already accepted the possibility. It would not contradict core beliefs of eastern religions. Mormons, Scientologists, and Raelians include intelligent extraterrestrials in their theologies. In any event, the odds of contact anytime soon are very slim.

In 50 years materialists, evolutionists, creationists, and advocates of intelligent design will be repeating the arguments they make now.

The Meaning of Slime

Cancellations of two space telescope projects, the US Terrestrial Planet Finder and Europe's Darwin, set back the search for extraterrestrial life, but other space telescopes and improved earth-based telescopes are coming. They will read temperatures, use spectroscopes to analyze atmospheres, and detect reflected glint off bodies of water.

Atmospheres could reveal life. An E.T. astronomer viewing Earth would find low levels of carbon dioxide and high levels of oxygen and realize that photosynthesizing organisms have transformed our atmosphere.

Detecting life might stir creationists, but not shake them. They could deny spectroscopic rainbows or downplay the significance of life that could be nothing more than a thin film of rudimentary organisms. What is slime next to humans, God's creation in his own image? Some websites already make the argument, preemptively, I suppose.

That leaves E.T. to do the shaking.

The best argument against extraterrestrials contacting us soon is that they have ignored us so far. Search for extraterrestrial intelligence (SETI) projects have been listening for fifty years and have heard no telltale signals from intelligent beings.

We will not visit them soon. At one-tenth the speed of light it would take 43 years to reach the nearest neighbors, the three-star system known as Alpha Centauri. Before that happens, we have to invent a craft a thousand times faster than anything we've built so far.

Nor will we spot their cities. Even through the next generation of telescopes, exoplanet images will remain bright specks or over-enlarged blurs. A slightly better prospect is that spectroscopic analysis could reveal a polluted atmosphere, provided the neighbors have our filthy habits.

Dan Vasey is a home brewer and reformed academic, living in Australia and retired from teaching after stints in Colorado, Papua New Guinea and Iowa. An anthropologist and human ecologist, his research specialty has been population and agriculture. (more...)
Related Topic(s): Creationism; Evolution; Extraterrestrial; Science; Scientists; Universe, Add Tags
Add to My Group(s)
Go To Commenting
The views expressed herein are the sole responsibility of the author and do not necessarily reflect those of this website or its editors.

When American Business Fights a Higher Minimum Wage, It's a Tragedy of the Commons

Vote Absentee and Forget About ID