In actual fact, they face the threat of their domestic police state. 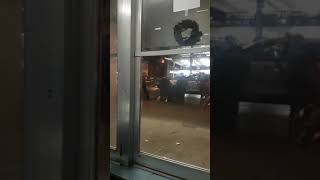 Police brutality... I have your name
(Image by You Tube)   Details   DMCA

I posted this item earlier... am reposting it with commentary.

There is an abundance of shocking information about how white people are being marginalized in their own countries. Even President Putin of Russia has noticed it and spoken about it.

Consider, for example, the experience of a white American citizen with American ancestors going back generations with airport security ( TSA ) and with US customs if returning from abroad, such as the experiences described in the American Conservative article. It is a strange experience for most Americans to find themselves interrogated by dark-skinned recent immigrants, perhaps from "terrorist countries," with accents. How did it come to be that a security system allegedly put into place in order to protect Americans is, in actual fact, a threat to Americans? Under TSA interrogation, the rights of citizens vanish. Citizens can be detained, searched, and their digital information can be downloaded and put into government files. If citizens object, they can be arrested on a variety of pretexts.

It is enough to bear when your interrogator obviously was not born an American. But when it is your own kind doing it to you, you realize that you are a stranger in your own country and regarded as a potential threat. There is no distinction between citizen and external threat. Your society has collapsed. You are regarded as a potential terrorist, pedophile or money launderer. Using airports subjects you to these suspicions.

An American experiences the same absence of bond when stopped by police. In former days the police were courteous while enforcing the law. Today the police are not so much enforcing the law as exercising authority over you. Too many police officers enjoy their power and look forward to the high it gives them. For the citizen, the consequences can be deadly.

Power trips are everywhere taking over. For example, I remember reporting on a case where a mother was sitting in the shade on the front lawn of her home on a cul-de-sac where there was no traffic, watching her child play. A woman in the neighboring house could see the child but not the mother and called the police to report what she thought was a case of parental negligence. The police arrived with Child Protective Service and seized the child and arrested the mother. The father had to leave work, find a lawyer and spend time and money putting the family back together. Such a pointless traumatic experience had to damage their concept of what it means to be an American and to have neighbors.

These types of incidents have become commonplace. Medical doctors and school teachers have to report if children have bruises, as a bruise might be evidence of child abuse, not a result from a tumble in sports or from a bicycle. Americans are encouraged to rat out one another. Just listen to the continuous drone of airport announcements after you have cleared security to "report any suspicious person." A suspicious person is in the eye of the beholder, who might be a prankster, a malcontent, or racially or gender biased. The authorities are glad to have a report, because it justifies their job. They will treat the reported person with far more suspicion than is warranted.

TSA interrogators know it is pointless to select an American grandmother, medical doctor, mother with a baby or small children, businessman, schoolteacher, journalist, for additional screening and questioning. But the interrogators enjoy their moments of power over others. They enjoy the inconvenience they cause others. The interrogators don't pay the cost of a missed flight, a missed appointment, inconvenienced relatives at the other end. Maybe their victim will lose his or her cool and can be further detained. The satisfaction that comes from "I really stuck it to that SOB" is large.

A society that creates so many avenues for citizens to inconvenience and damage one another is a deathly sick society. Now that the sickness is institutionalized, how do we get rid of it?

Related Topic(s): American_History; Immigrants; Suspicion; Terrorist Threat, Add Tags
Add to My Group(s)
Go To Commenting
The views expressed herein are the sole responsibility of the author and do not necessarily reflect those of this website or its editors.