It has rewritten media-ownership rules to benefit giant corporations, including the pro-Trump Sinclair Broadcasting. 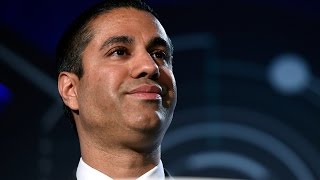 Eighty years ago, the dawn of the modern communications age coincided with the rise of authoritarian leaders who controlled and manipulated communications in Europe. President Franklin Roosevelt recognized the danger, declaring that...

Roosevelt and his aides were determined to guard against media-ownership structures that might place control of broadcast media in the United States in the hands of a tiny circle of elite individuals or corporations. To that end, they advocated for a muscular Federal Communications Commission that would guard against consolidation of media ownership and assure that all Americans had access to the information and ideas that sustain democracy.

The FCC was charged in 1934 with the clear mission of protecting the "public interest" from profiteers and propagandists. That mission was enhanced and extended over time. It was threatened, as well -- but never so aggressively, nor so dramatically, as it is now threatened.

President Donald Trump's chair of the FCC, Ajit Pai, and the Trump-aligned majority on a commission is bent on clearing the way for precisely the sort of media monopoly that FDR and the small-"d" democrats of his time feared.

Last week, the FCC voted 3-2 for a radical rewrite of media-ownership rules that will benefit corporate conglomerates, while diminishing the character and quality of the discourse in communities across the United States. In so doing, they strengthened the hand of at least one conglomerate that is closely aligned with Trump.

Related Topic(s): Democracy Destroyed; FCC; Media; Regulators, Add Tags
Add to My Group(s)
Go To Commenting
The views expressed herein are the sole responsibility of the author and do not necessarily reflect those of this website or its editors.