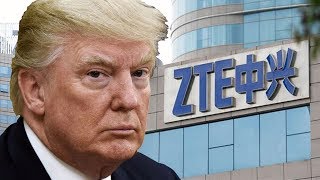 A couple of weeks ago Donald Trump stunned political observers and many of his supporters with a tweet expressing concern about the jobs being lost in China due to the troubles facing ZTE, a Chinese electronics manufacturer. He told his Commerce Secretary, Wilber Ross, to see what he could do to help ZTE.

Even from a president who seems to take pride at being unpredictable, this tweet was extraordinary. At the most basic level, the concern for jobs in China appears 180 degrees at odds with the "America First" philosophy he proudly announced in his inaugural address.

The other reason why the concern about employment prospects at ZTE seem out of place is that the company is suffering because it is being punished for violating sanctions against North Korea and Iran that were the results of international agreements. Trump is prepared to impose unilateral tariff penalties on trading partners and allies based on nothing more than ill-defined national security considerations.

In many cases, these tariffs would cost jobs in countries that are close US allies. Also, this job loss would not be the result of any improper behavior, just Trump's way of reducing the trade deficit.

Trump's sudden concern for jobs at ZTE took on a different light a few days later when it was revealed that China's state enterprises would loan hundreds of millions of dollars to a Trump resort project in Indonesia. Were Trump's efforts to help ZTE simply payback for the assistance in Indonesia?

This is hardly the first time that Trump's actions could be tied to efforts to help his business or that of his family members. When Trump first met with Chinese President Xi Jinping in April of 2017, he was asked whether he raised the issue of currency valuations with Mr. Xi. Trump treated the question dismissively, saying that Xi was going to help him in dealing with North Korea, so why should he bother him by raising the issue of China's currency management.

This was after Trump had spent a year and a half on his presidential campaign denouncing China as a "world class currency manipulator." There is a plausible explanation for Trump's sudden lack of interest in China's actions in currency markets.

On the day that Trump was meeting with President Xi, China's government granted three trademarks to his daughter, Ivanka, (who was also at the meeting) for her line of clothing accessories. Undoubtedly these trademarks were of considerable value to Ms. Trump.

Of course, both the investment by the Chinese state enterprises and the granting of trademarks could just be coincidences, but it is more plausible that Trump is openly using the presidency to benefit his family business and those of his daughter. That possibility has to be at least as likely as the alternative: that Trump suddenly abandoned his long-held positions without any obvious reason.

Trump is a sharp departure, in this respect, from other recent presidents of both parties. It has long been the norm that the president either puts their assets in a blind trust or sells them off to hold assets like government bonds or index funds, the value of which cannot be easily affected by presidential policy.

Trump completely disregarded this longstanding norm. While he turned over the operations of his business to his children, he has the option to reverse this at any time. Furthermore, he is well aware of the assets his family business holds.

Trump's extraordinary wealth would have made full divestment more difficult than was the case for prior presidents, who had considerably less money. Nonetheless, there were still relatively simple solutions that would have allowed Trump to quickly separate himself from his businesses in a way where he no longer stood to profit or lose, based on his actions as president.

It was not by necessity that Trump and his family continue to hold a vast web of properties, the value of which is hugely affected by Trump's actions as president. He has quite clearly chosen to put himself in this situation.

Dr. Dean Baker is a macroeconomist and Co-Director of the Center for Economic and Policy Research in Washington, D.C. He previously worked as a senior economist at the Economic Policy Institute and an assistant professor at Bucknell University. (more...)
Related Topic(s): Assets; China; Jobs; Trump Broken Promises; Trump Conflict Of Interest; Trump Family; Zte, Add Tags
Add to My Group(s)
Go To Commenting
The views expressed herein are the sole responsibility of the author and do not necessarily reflect those of this website or its editors.