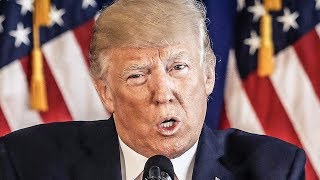 Trump Wants To Be A Dictator
(Image by YouTube, Channel: The Ring of Fire)   Details   DMCA

President Trump has suddenly announced that he is upping his trade war against China by imposing another $300 billion of tariffs on Chinese goods. According to the Washington Post, Trump said that his tariffs would begin at 10 percent on such products as cellphones, television sets, toilet seats, and pillows but could increase to 25 percent. As Trump adviser Peter Navarro declared, "We love tariffs. Tariffs are a wonderful thing."

Okay, so our nation's Republican president loves taxes, which is precisely what tariffs are. No surprise there. Despite their customary "reduce taxes" rhetoric, Republicans have long been supporters of big spending, along with the taxes to fund them income taxes, Social Security and Medicare taxes, tariffs, excise taxes, property taxes, poll taxes, sales taxes, inflation taxes, and, well, every other forcible extraction of money from people to fund the ever-voracious needs of the federal government.

But I thought that in the United States, it is supposed to be Congress that sets the taxes by voting to enact them, after which the president signs the legislation into law. Isn't that what everyone is taught in the civics classes in the public (i.e., government) schools to which parents are forced to send their children?

Yet, here is Trump himself imposing the taxes. The way he sees it is: Who needs some stinking Congress to perform that job when a dictatorially oriented president is able to do it himself?

Trump's unilateral imposition of taxes on the American people is in the finest tradition of dictatorship. That's what dictators do. They dictate. They don't wait for some legislative body to decide the taxes and the laws. If Trump feels that the American people need to pay higher taxes to fund the ever-growing welfare-warfare operations of the federal government, he simply issues a decree-law that sets the new taxes. Congress and, for that matter, the courts are expected to play their supporting role.

Of course, Trump's dictatorial imposition of more taxes on hard-pressed Americans isn't the only way he is accelerating the destruction of American liberty. His trade wars themselves do that as well.

Like everyone else, Americans have the natural, God-given right to trade with whomever they want anywhere in the world. It's their money, after all, not Trump's, not the government's, and not society's. Freedom necessarily entails the right to travel wherever Americans want and spend their own money anywhere they want, without the permission or interference of the U.S. government.

That's the freedom that Trump, along with his Republican and Democratic cohorts, have destroyed in America. For example, if an American travels to Cuba and spends money there without first securing permission from Big Daddy (i.e., the federal government), he is arrested, prosecuted, convicted, fined, and sent to his room in a federal penitentiary, all with the full support of both Republicans and Democrats.

One tragically amusing aspect of this phenomenon is that Americans, the people who have had their freedom destroyed by their own officials, dutifully celebrate the Declaration of Independence every year. You know, the document that states that life, liberty, and the pursuit of happiness are natural, God-given rights that no government can legitimately destroy.

But the truth, no matter how discomforting it might be, is that with his trade wars and his unilateral imposition of taxes on the American people, Trump has accelerated the destruction of American freedom. It is Dictatorship 101, all nicely wrapped up in an American flag and a mantra of "making America great again."

Related Topic(s): China; Donald Trump; Tariffs; Taxes, Add Tags
Add to My Group(s)
Go To Commenting
The views expressed herein are the sole responsibility of the author and do not necessarily reflect those of this website or its editors.