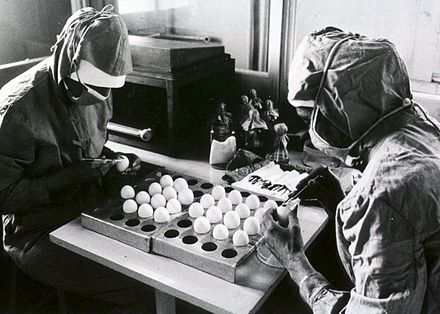 As of May 3, the Democratic Republic of Congo's Ministry of Health reported 1,510 cases of Ebola and 1,008 deaths to date in the country's current outbreak. Partial blame for the government's inability to contain the outbreak goes to armed attackers who believe that international health workers are there to intentionally spread the disease, not treat it.

As of April 26, The US Centers for Disease Control reported 704 cases of measles and no known deaths in the country so far in 2019. Partial blame for the outbreak goes to Americans who decline (or simply overlook) vaccination for themselves or their children.

You may have noticed both facts. They've both been reported in the US media -- the latter far more than the former, the former perhaps evoking a feeling of sadness or helplessness, the latter whipping up large-scale outrage, up to and including calls for every man, woman, and child in the US to be dragged to the nearest vaccination clinic whether they want to go or not.

Disclaimer: I am not an "anti-vaxxer." I don't un-skeptically accept every claim made by those who refuse or oppose vaccinations. My limited reading says that many of those claims are not supported by science.

In fact, I've probably had more vaccines than you. I got the usual vaccinations as a child. Then more when I joined the Marine Corps, and more after that when I deployed overseas (twice -- my shot record got lost). The only time I complained was when I was ordered (under threat of court-martial for refusal) to accept an experimental anthrax vaccine from a tube marked DO NOT USE ON HUMANS in Saudi Arabia at the beginning of Desert Storm.

Vaccines as such don't bother me a bit. But I believe that you own your body, and that you are therefore entitled to decide what may or may not be put into that body. If you choose to forgo any or all vaccinations, that's your choice to make for yourself and for your children or wards.

It is an undisputed fact of that there ARE risks associated with vaccination. They are rare and usually minor, along the lines of allergic reactions, but they exist and they are occasionally fatal.

Who should get to decide whether or not those risks are acceptable? The person into whose arm the needle is to be injected, or that person's guardian, and no one else.

Yes, it is an initiation of force, and should therefore be treated as a crime, to knowingly or negligently transmit an infectious disease to unwilling others. If you've got the measles or some other infection, and know it, you should avoid contact with the public, and I have no real problem with quarantine laws enforcing that.

But the current hysteria over a tiny number of cases of a usually non-fatal disease is bringing out the worst in Americans. By "the worst," I mean calls for government to force vaccinations on the unwilling.

Related Topic(s): Measles Vaccination; Vaccinations; Vaccines, Add Tags
Add to My Group(s)
Go To Commenting
The views expressed herein are the sole responsibility of the author and do not necessarily reflect those of this website or its editors.