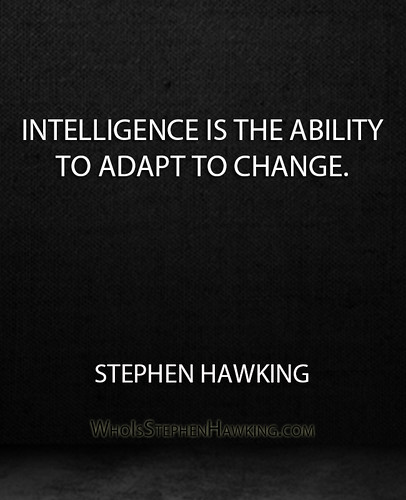 ''Intelligence is the ability to adapt to change.'' - Stephen Hawking
(Image by QuotesEverlasting from flickr)   Details   DMCA

As the media hypes the end of Covid restrictions and people being able to celebrate going "back to normal", how will the people of this nation react? One can only hope that they will find the will to respond in an adult and socially responsible manner; to apply the lessons we learned from this experience. Will we realize that we are emerging from a very dark time? Will we be chastened by the poor response to the pandemic? Will we be ready to correct the misadventures of the past by building better and more sustainable systems for this nation and the human beings who reside within its borders?

We can almost foresee the wild exuberance about to break out with the full support of economic interests, the Republican Party and all the elements who resisted attempts to unify the nation to slow the spread of the virus. Those elements will be willing to say, "See, we told you it was not so serious; we got through it just fine without masks, vaccinations or social distancing, and we really did not need to slow down or shut down the economy". It will be the old "I told you so" of the naysayers.

We must remember that the "rules" about businesses, limits, and closures, as well as the encouragements of masks, vaccines and social distancing, were there to help prevent more spread of the virus. Getting rid of the "rules" will not slow the spread of the virus. In fact, getting rid of those last few "rules" will take off those last safeguards, increasing the likelihood of getting the virus. The virus will simply have a bigger arena in which to operate. Taking those rules away may give us a false sense of security to let our guard down. In reality, relaxing those "rules" has more to do with economic pressures than actual health issues.

We need to remember and be chastened by the incredible number of deaths, over 580,000 of our fellow citizens, and that number is probably low by some reports. If we learned nothing in the process, they did indeed, die in vain. Many of those deaths, higher per capita than any other industrialized nation in the world, were the result of decades of underfunding, and in some cases, cutting public health and social services, leaving a system in tatters to deal with a world-wide pandemic. We were left to reconstruct a system on the run, playing catch-up while more and more people died. We were directed on the national level by a president who seemed to resist our best efforts at every turn and a political party who supported that lack of effort. And I might add that that party continues to support the resistance to correcting past mistakes or doing anything except return to the "same-old, same-old", leaving us just as unprepared as we had been before the pandemic, apparently having learned nothing in the process.

Resistance came from those who would focus first on economics, businesses, corporations, and other financial interests, championed by the Republican Party. There was resistance to lock downs, limitations on businesses and even on the need to wear masks or practice social distancing, not to mention vaccinations. The science and medical research was challenged. With little direction or guidance coming from the national level, the governors took emergency actions on the state level only to be confronted with Republican resistance.

There was a strange kind of belief in "herd immunity"; just let the pandemic run its course and see what is left, such as was practiced in Sweden for a while, before they came to their senses. Most notably the herd immunity seem to be practiced in Brazil and India under the tutelage of autocratic leaders. Of course, the problem with herd immunity from a human rights perspective, is that those most likely to be infected and die are those on the bottom of the socio-economics spectrum, those most vulnerable and with the least resources to support their struggles. Meanwhile, those on the top of the economic pyramid have access to the best protections from the virus and the best and most current treatment strategies.

The message of those economic interests is that we must open for business as quickly and completely as possible to get "the economy" back into high gear; i.e., back to the old normal. In effect, the message is that we must focus on economic indicators, and only those who understand and run the economy can keep it working well. So, don't worry about things. We, the economic leaders, will take care of the future and solve the problems. You just go on with your lives, enjoy the return to the old normal, party and celebrate and we will return the world to what it was before the pandemic.

Part of that solution is a return to the large concentrations of people, resources, and capital necessary for production and consumption in order to return the system to where it had been. Corporations need to use the masses, mass gatherings, mass consumption, mass production. And, in order to keep us buying into that ideology they need mass communication provided by a media, largely controlled by corporations. They even have convinced us to be continually hooked into a mass communication system with its propaganda, on our smart phones and ubiquitous earphones and ear buds.

The issue comes down to democracy. Are we a nation that is founded on democracy with its concerns for the citizenry first, or are we a nation in which free-market capitalism trumps any democratic or human concerns? The answer over the last several decades has been a drift toward the primacy of economic concerns to the detriment of concerns for the citizenry of a democracy. And all of this under the guise that somehow capitalism was really another word for democracy and that one could not exist without the other, conflating the two terms. The result was that radical capitalism, following the ideology of neo-liberal economics, simply consolidated the wealth and power of the planet. Meanwhile, the rest of the population of the planet watched that consolidation in dismay. They were left to fight over the economic crumbs while witnessing the devastation of the environment.

And as this was somehow presented as the results of democracy being spread across the world, people lost faith in that democracy, which was, in reality, a counterfeit democracy. They began to reject what was passing for democracy, turning instead to more authoritarian leadership, which promised to rescue them from this peril. However, in reality it simply shifted the remaining power to the very manipulators they thought they were opposing. The result being that the power and control of the planet are placed firmly in the hands of a rich and powerful economic aristocracy who are to take care of the ordinary citizens very paternally, or maternally, whichever might be the case.

So, we are left with these questions:

· Are people willing to go back to a world that thinks that slow, incremental change will solve our global environmental issues?

Related Topic(s): Community; Democracy; Economics; Future; Independence; Learning; Manipulation; Resistance; Safeguards, Add Tags
Add to My Group(s)
Go To Commenting
The views expressed herein are the sole responsibility of the author and do not necessarily reflect those of this website or its editors.