Derek Chauvin's demeanor since the moment of his arrest for the killing of George Floyd has been a combination of disbelief, rage, and victimhood. Chauvin's attorney, Eric Nelson, was quick to engender those perceptions in the jurors, saying, "You will learn that Derek Chauvin did exactly what he had been trained to do over the course of his 19-year career." Guess what? Nelson is to a large extent right.

Why wouldn't Derek Chauvin be shocked? American policing has contained within its DNA a culture of violence and rogue conduct from its origins. Violence and subversion of rights have been a longstanding tradition in police departments, complete with support for the most virulently racist organizations in US history, most notably the KKK.

In historical context, what Derek Chauvin did was not remarkable for an American law enforcement officer. Nor is the contention by his defense that he did nothing wrong. It was wrong, but it certainly was not an outlier. Yes, the conduct we see in the George Floyd video is derivative of many aspects of police training.

"You are men and women of violence. Violence is your tool."

In the aftermath of the 2014-2015 Michael Brown killing protests in Ferguson, Missouri, director Craig Atkinson produced the groundbreaking documentary Do Not Resist. Atkinson's film confronted, among other things, the culture of violence in American police training.

The following segment from Do Not Resist focuses on Grossman's training techniques. Listening to Grossman nonchalantly encourage police killing, the image of Derek Chauvin's air of ambivalence as he slowly snuffs out the life of George Floyd with his hand in his pocket suddenly makes sense.

As the film points out, "Dave Grossman's books are required reading at the FBI Academy and at police academies throughout the country."

The striking similarities between the video images of the Eric Garner and George Floyd killings were undeniable. Multiple police officers restraining one man, neck compression, pleas for air, for mercy, all going unheeded, ending in silence and death. But there is another similarity that weighed heavily in the Garner case and may too in the Floyd trial.

The medical examiner's report in the Garner case described the cause of death as "compression of neck (choke hold), compression of chest, and prone positioning during physical restraint by police." Here's a look at what really killed Eric Garner " 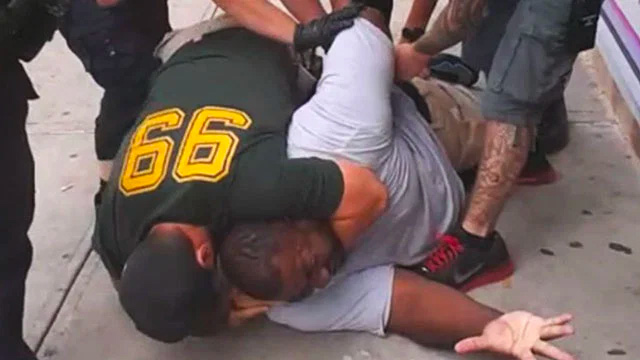 Related Topic(s): Death; Derek Chauvin; Police; Violence; Wrongful Death, Add Tags
Add to My Group(s)
Go To Commenting
The views expressed herein are the sole responsibility of the author and do not necessarily reflect those of this website or its editors.