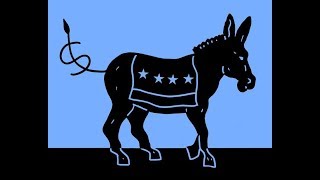 The Wall Street wing of the Democratic Party will always be with us. Its policies -- on financial deregulation, trade, fiscal austerity, mass incarceration, and military intervention -- have been ruinous. Its political aversion to populist appeals has been self-defeating. But Wall Street has the money, so it will always enjoy upholstered think tanks, perches on op-ed pages, and gaggles of politicians eager to peddle its proposals.

As the Democratic Party finds itself in the wilderness, the Wall Streeters are trying to argue that they have a way out. Will Marshall, co-founder of the Democratic Leadership Council and rabid advocate of the Iraq War and the Libyan debacle, has announced another venture, New Democracy, to develop "really big ideas" for Democrats. Third Way, which championed disastrous trade accords, balanced budgets, and cutting the safety net, is now touting a $20 million program to discover how to talk to working people without alienating Wall Street. And Douglas Schoen, a pollster and partner in a corporate public-relations firm who also plays a Democrat on Fox News, recently offered a New York Times op-ed on "Why Democrats Need Wall Street."

Schoen blamed populism for the catastrophic losses Democrats suffered at the national and state level in the Obama years, and attributed Clinton's 2016 defeat to a "lurch to the left" that exists only in his imagination. To him, the model president is Bill Clinton, and Schoen hailed "two key legislative economic victories" for the Clinton administration: the Telecommunications Act of 1996 and the Financial Services Modernization Act of 1999. The former opened the door for the speculative boom and bust in telecommunications that wasted trillions and left consumers with higher prices. The latter repealed Glass-Steagall and was central to the financial deregulation that led directly to the Great Recession. Schoen ended his column with a pitch for more financial deregulation, which surely served his clients, if not Democratic prospects.

Schoen is another Wall Street-backed minstrel. This transparent silliness comes from self-enforced blindness. Schoen and his ideological allies can't fess up to the ruinous effect of the centrist policies of the past decades. Inequality is now an obstacle to growth. Unprecedented trade deficits ravage entire communities. Austerity and deregulation have left millions of Americans struggling to stay afloat. Big money perverts our democracy.

None of Schoen's arguments are borne out by recent political developments. Bernie Sanders is the most popular politician in America because he is free to tell Americans who rigged the rules, how they are getting screwed, and what should be done to change course. Trump's improbable victory derived in part from his populist critique of the failed "establishment," which he supercharged with racist appeals. Despite hand-wringing from Wall Street, nearly one-third of Senate Democrats have endorsed Sanders's Medicare-for-All legislation, including presidential hopefuls like Kamala Harris, Elizabeth Warren, and Cory Booker.

Schoen did offer one serious argument about why Democrats need Wall Street: "an ugly fact of politics: money." Maintaining ties to Wall Street "keeps [Democrats'] coffers full," he argued. That's why some of the party's most visible potential presidential candidates -- Schoen named Booker, Kirsten Gillibrand, Deval Patrick, and Harris -- will always have ties to Wall Street.

But can populist candidates raise enough money to compete in America's billion-dollar presidential races and million-dollar Senate and House races? Even though he started late, Sanders raised about $220 million, mostly in small donations. Elizabeth Warren, the scourge of Wall Street, has been notably successful in funding her campaigns. Sherrod Brown, who pioneered populist campaigning in Ohio, has been able to be financially competitive. In the most expensive House race in 2016, progressive Jamie Raskin was able to defeat two multimillionaire opponents. Populist candidates will seldom be able to equal funds raised by Wall Street -- backed candidates or by self-funding billionaires, but if the populist temper of the time continues to build, more and more candidates may be able to combine small donations and volunteer energy to create competitive races.

There is no good alternative. The bankruptcy of the establishment is apparent. Unable and unwilling to challenge entrenched interests, the corporate Democrats have no answers for the challenges that now face the country. Attractive candidates like Barack Obama may be able to win elections and make some progress, and surely won't do as much damage as Donald Trump. But necessary and fundamental reforms will only happen if the populist movement in the country grows powerful enough to force the change.

Cross-posted from The Nation

Related Topic(s): Democracy; Democratic Sellout; Party Loyalty; Wall Street; Wall Street Greed, Add Tags
Add to My Group(s)
Go To Commenting
The views expressed herein are the sole responsibility of the author and do not necessarily reflect those of this website or its editors.