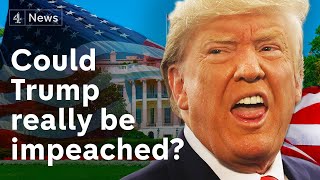 The Democrats know that there is no impeachable offense. What they intend to do is to use the investigation to look into every aspect of Trump's life and try to make dirt out of things unrelated to his talk with the Ukrainian president. This "impeachment investigation" is a political act to help their candidate win the next presidential election.

Democrats themselves describe it in this way. For example, here is how Rob Kall, the director of one of the progressive Democrat websites, described the purpose of the investigation:

"The idea should be to keep the impeachment going as long as possible, with new testimonies and new releases of disclosures of alleged corruption and treason on a regular basis.

"Looking at impeachment as a process for removing the president is the wrong way of thinking about it. Looking at it as a key that gives access to investigative tools is the smarter, more strategic, way of looking at it.

"Ideally, it will get so bad for Trump that the Republicans will end up putting up someone else to run in the general election.

"But keeping him under investigation, at least through the November election, will increasingly erode the support of both Trump and the Republican party brand, making a Democratic takeover of the Senate and the White House, and an increased control of the House even more likely."

In other words, it is a political power play.

The outcome depends on whether Americans see the impeachment investigation as another orchestrated hoax like Russia-gate or whether they fall for the hoax as they initially did with the Russia-gate investigation.

The United States does not have a media. It has a propaganda ministry that helps the ruling elites control the explanations that Americans are given. Polls show that Americans have lost confidence in the media. If so, the impeachment investigation will backfire on the Democrats.

The ultimate purpose of the constant attacks on Trump is to teach the American voters that electing a president who is disapproved by the Establishment is futile. The Establishment simply will not permit any change and will frustrate and destroy any president not selected by them as a candidate.

This is the real way so-called "American democracy" works. The establishment guides the selection of the Democrat and Republican candidates. Whichever wins, the Establishment wins. This didn't happen in Trump's case, and so he has to be prevented from altering the Establishment's agendas.

Related Topic(s): Democracy; Democrats; Impeachment; Russia-gate, Add Tags
Add to My Group(s)
Go To Commenting
The views expressed herein are the sole responsibility of the author and do not necessarily reflect those of this website or its editors.