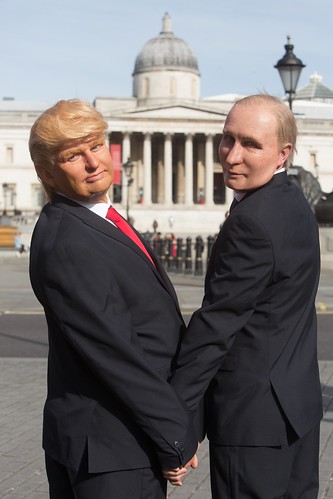 They got Al Capone for tax evasion -- only tax evasion. It wasn't very satisfying for his prosecutors. But they couldn't prove murder or racketeering. So they got him where they wanted him: behind bars. It wasn't elegant. But they got the job done.

Congressional Democrats need some of that prohibition-era pragmatism. They want Donald Trump impeached. But unlike Capone's tormentors, Dems are largely ignoring Trumpy crimes they can prove in favor of those they can't -- Russian "election hacking" that may not have happened at all.

Democrats seem determined to maintain their status as a political version of the gang that couldn't shoot straight.

Day after day, Democratic leaders and their allies in corporate media have been going on and on about how "Russia hacked the election." Exactly what they mean by "hacking" has been so frustratingly vague, and solid evidence so consistently absent, that it's hard to avoid the conclusion that they're making it all up or, la Bush and the WMDs in Iraq, conflating what they suspect with what they know.

This throw-hacking-allegations-at-the-wall-and-hope-they-stick approach has fed a dark alt-right media narrative about an attempted "deep state" coup against a democratically-elected president who won despite the virtually universal contempt of the gatekeeper class.

As the Dems deRp around deep in the weeds of their confused and confusing Russia hacking narrative, they're neglecting the much tastier, low-hanging impeachment fruit they could easily use to hasten the day when D.C. Metro cops frogmarch The Donald out of 1600 Pennsylvania Avenue: straightforward corruption.

Russian hackers may have accessed a U.S. voting machine company. But even the spooks who accuse Russia of "meddling" -- whatever that means, no one seems able to articulate -- say they didn't affect the election results. Hillary would have lost anyway. So why is this even a thing? Anyway, there's almost certainly no tie there to Team Trump. Perhaps not a nothingburger, but useless to Democrats hell-bent on impeachment.

Then there's the DNC emails posted by WikiLeaks. As I've noted before, WikiLeaks leader Julian Assange said he didn't get them from Russia. Also at WikiLeaks, Craig Murray says they were handed to him by a pro-Bernie DNC staffer. So it was a leak, not a hack. Anyway, even if Russia gave them to WikiLeaks -- which looks doubtful -- we should thank Team Putin for revealing just how venal and corrupt the DNC was when they decided to cheat Bernie Sanders out of the nomination.

Telling the truth about lying DNC scoundrels who belong in prison is "meddling"?

The Democrats are right about one thing: there's lots of smoke. They're wrong about the type of fire.

The real Trump-Russia connection to look into is about a corrupt quid pro quo. It goes something like this: Trump aides tell their Russian contacts in 2016: if our guy wins the election, we'll drop U.S.-led economic sanctions against Russia over the annexation of Crimea. In return, you let our guy build as many ugly hotels in Russia as he wants. They might also forgive millions of dollars his businesses owe to Russian banks and oligarchs.

By declaring Trump's election a constitutional crisis from day one, Democrats have been overreaching. Pushing the "Russia hacked the election" narrative -- when there's still no public evidence it happened at all, much less that Trump had anything to do with it if it did -- is getting way ahead of the story.

If Democrats were smart, they'd focus on the corruption angle.

Related Topic(s): Democrats; Dumbing Down; Election Investigations; Russian Hacking, Add Tags
Add to My Group(s)
Go To Commenting
The views expressed herein are the sole responsibility of the author and do not necessarily reflect those of this website or its editors.