Sanders is right that the party cannot surrender to "a corrupt political system bought by billionaires like Mr. Bloomberg." 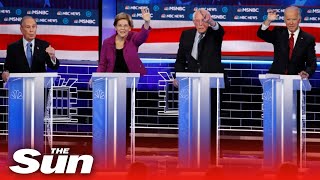 Democratic candidates target Bloomberg and each other
(Image by YouTube, Channel: The Sun)   Details   DMCA

Elizabeth Warren and Bernie Sanders shredded a billionaire and the billionaire class Wednesday night in the most important debate so far in the race for the 2020 Democratic presidential nomination.

With the best illustration since last summer's Democratic debate in Detroit of how these two senators can together build a powerful case for a different kind of politics, Warren and Sanders targeted a newly arrived debater, free-spending billionaire Michael Bloomberg, while at the same time framing an argument that the Democratic Party must not barter off its future to the highest bidder.

Warren set the tone for the evening with the most powerful opening statement yet delivered in the nine debates of a Democratic race that is only now beginning to take shape. The senator from Massachusetts put Bloomberg in a box with the president Democrats are desperate to defeat in November, declaring: "I'd like to talk about who we're running against. A billionaire who calls women 'fat broads' and 'horse-faced lesbians.' And no, I'm not talking about Donald Trump, I'm talking about Mayor Bloomberg."

Then Warren made the political point that mattered. "Democrats are not going to win if we have a nominee who has a history of hiding his tax returns, of harassing women, and of supporting racist policies like redlining and stop-and-frisk," she said. "Look, I'll support whoever the Democratic nominee is, but understand this, Democrats take a huge risk if we just substitute one arrogant billionaire for another."

Warren nailed it on a night when all the non-billionaire candidates tackled Bloomberg. And she followed up her comparison of Bloomberg's sexism with that of Trump by deposing the Democratic billionaire regarding his use of nondisclosure agreements to hide evidence of a toxic work environment within his vast empire. This was Warren at her very best, especially when she concluded the discussion by reminding Democrats that "this is not just a question of the mayor's character. This is also a question about electability." She went on to explain, "We are not going to defeat Donald Trump with a man who has, who knows how many nondisclosure agreements and the drip, drip, drip of stories of women saying they have been harassed and discriminated against. That's not what we do as Democrats."

Related Topic(s): Bernie Sanders; Billionaires; Capitalism; Class Politics; Corporations; Debate; Democrats; Democrats Progressive; Elizabeth Warren; Mike Bloomberg, Add Tags
Add to My Group(s)
Go To Commenting
The views expressed herein are the sole responsibility of the author and do not necessarily reflect those of this website or its editors.