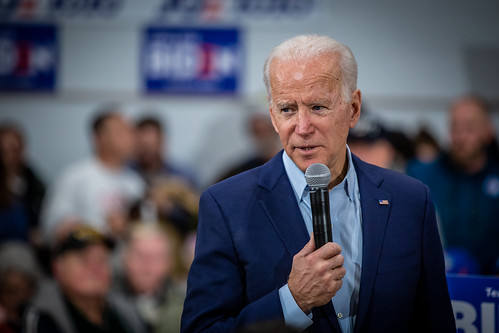 Recent polls show Democratic challenger Theresa Greenfield leading incumbent Iowa Senator Joni Ernst by two or three points. The chance of changing the Iowa seat and others around the country, including Susan Collins and even Senate Republican leader Mitch McConnell, plus overall Senate control, could be determined by what happens at the top of the ballot.

Trump will use every trick in his book as Election Day nears. Attorney General William Barr and Barr appointee-prosecutor John Durham will try to paint Biden as a Ukraine briber for his son's profits--even though Biden was carrying out policy of the U.S. and E.U. policy to replace the existing prosecutor who was corrupt with a better one who would end more corruption and serve Ukraine well. Trump, Barr, Durham, and Senate trump ally (and regular golfing buddy, including this week) Lindsay Graham, Judiciary Chair, will try to replay the Comey playbook of a last-minute investigation like they did against Hillary Clinton-- "full of sound and fury, signifying nothing" as Shakespeare famously wrote.

But the bad-mouthing, which worked against Hillary Clinton after Comey's non-reinvestigation, will happen to Biden now, with new actors.

As the US and the rest of the world grapple with police brutality and Coronavirus, Joe Biden has been reduced to running for president from his basement other than a couple well received speeches in Philadelphia and Houston, plus his most recent "Trump is derelict in his duty" speech this week in Wilmington, in Biden's home state of Delaware. While he is now ahead of President Trump nationally and in key battleground states, the election is still over four months away. He could lose if he is seen as living on just being "not Trump".

By sitting back and hoping that Trump loses the election by his personality as well as his handling of the Coronavirus and Black Lives Matter protests, Biden risks becoming the modern day Michael Dukakis. Dukakis blew a 15 point lead by insisting on spending most of the work week in his house in Massachusetts. As the Los Angeles Times' Bob Drogin wrote following the 1988 election, "Dukakis tried to sit on his lead," despite the fact that half of his supporters couldn't identify any of his policies.

Just like the rest of the country, staying at home forever is not a realistic option.

This is not to say that Biden should hold rallies, as Trump did indoors in Tulsa, Okla. on June 20 and Phoenix, Arizona on June 23., despite health experts' warnings. But there are actions the former vice president can take. Trump has toured manufacturing plants where they produce surgical masks.

Four-Star General Barry McCaffrey, the former SouthCom (Latin America) Commander, Colin Powell's assistant, and former Drug Czar, is usually non-partisan in presidential elections. But he told us one of the best suggestions we've heard. He said Biden should rent out a floor of a hotel in D.C. and hold meetings with the intellectual communities that form policies. He should hold press conferences regularly with media cameras and reporters. While Elizabeth Warren came up short in her run for the Democratic nomination, she received praise for her long list of specific policy proposals, a strategy the Biden campaign could adopt-- and do it more actively with more media than even Warren generated.

Biden needs to give people an idea of what kind of president he would be.

After Trump's confusing, inaccurate Oval Office address on the Coronavirus on March 11, Biden gave his own speech the next day about what his plan would be. With American flags surrounding him, and plans that actually made sense, it's about as stark a contrast as one ca think of. In a speech on June 30, Biden properly said, "It's not about I, it's about us."

Trump makes it easy for him. Biden would have scored major points if he gave a major policy speech, in public (with limited attendees) the day after Trump suggested that Americans inject and consume Lysol to fight off the infection. The president gives him these chances on a near daily basis. It's time to stop playing "prevent defense." Now, he points to the ludicrous non-reading of daily national security briefings, or ignoring their findings.