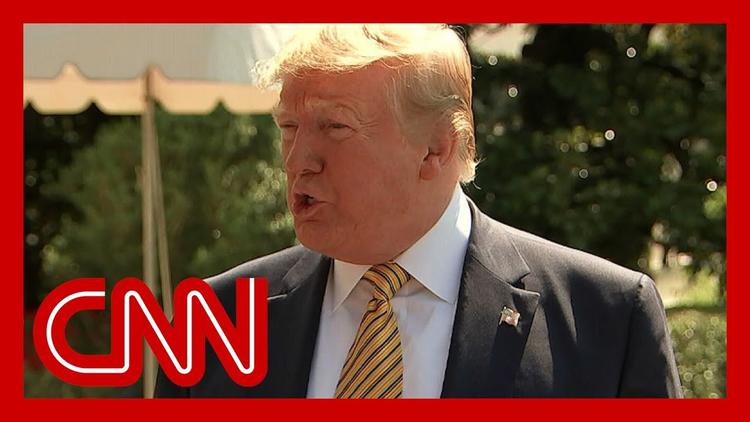 Trump can't get the conservative script right to save his life. The argument warmongers made for breaching the 2015 Iran nuclear deal (Joint Comprehensive Plan of Action or JCPOA) was that it did not address a range of Iranian behavior beyond nuclear matters, such as its military intervention in Syria or (they allege) Yemen, or its ongoing work on ballistic missiles, or its support for Hizbullah in Lebanon.

Few argued that the JCPOA was useless in deterring Iran from making a nuclear weapon. Some worried about a 15-year sunset provision to the deal, but it was envisioned the UN inspections would continue.

Trump is now citing Iran's non-existent bomb-making as the reason for his breach of the treaty and not mentioning any of the things the hawks mind.

Iran isn't making a bomb and gave up 80% of its civilian nuclear enrichment program in the JCPOA.

In fact, there have been no US intelligence assessments that Iran had decided to try to make a bomb since Tehran admitted in early 2003 that it had an enrichment program (it was supposed to report the program to the UN under the terms of the Non-Proliferation Treaty, which Iran had signed).

Uranium comes in nature in two isotopes, U-238 (very common and relatively inert) and U-235 (rarer and much more volatile). In order to use uranium to fuel a nuclear reactor, it has to be enriched to roughly 3.5% of U-235. If it is enriched to 95% U-235, it can be made to blow up in a thermonuclear explosion, as the US did at Hiroshima and Nagasaki in 1945.

Iran knows how to enrich uranium, but has never enriched to levels above what is considered "Low Enriched Uranium." The cut-off is above 20% U-235. It has a medical reactor that uses 19.5% enriched uranium.

Although the US CIA has not assessed that Iran has during the past decade and a half had a nuclear weapons program, its civilian enrichment capacities were potentially dual use, so that there was always a chance Tehran might decide to militarize.

I can't get anybody to believe me on this, but Iran is a Shiite theocracy led by an Ayatollah, and Ali Khamenei has given several fatwas (fatwas or considered legal rulings can be oral) in which he has forbidden the making, stockpiling or use of nuclear weapons. Khamenei rules according to Islamic law, which disallows the deliberate infliction of mass casualties on civilian noncombatants in war. Nuclear weapons obviously target the populations of whole cities and so the ayatollahs consider them tools of Satan.

On the other hand, having the world know that you could whip up a nuclear bomb in short order is a form of deterrence against invasion. Japan has that capability. Iran probably had that capability before 2015.

The 2015 agreement attempted to forestall any move by Iran to develop a nuclear weapons enrichment program (again, it has never done so and says it never would).

Still, for the suspicious, the JCPOA took away the option of quick militarization with four steps:

1. Regular UN inspections of sites for signatures of high-enriched uranium or for plutonium

Related Topic(s): Iran; Iran President Hassan Rouhani; Iran War; Jcpoa; Military War Strategy; Sanctions, Add Tags
Add to My Group(s)
Go To Commenting
The views expressed herein are the sole responsibility of the author and do not necessarily reflect those of this website or its editors.