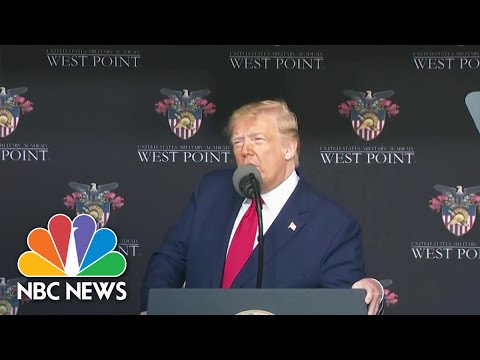 It was bad enough that Trump endangered the health of the graduating class at West Point -- for the purposes of a photo op for his reelection campaign by insisting on bringing them back to campus. It was bad enough that he gave an alarming performance in which some observers saw an advancing dementia and during which he had difficulty lifting a glass of water.

What was worse was all the lies and half-truths Trump told the West Point graduates.

He reiterated that he would not allow the military to change the names of the bases named during the Jim Crow era for Confederate generals, which is something I wish I could have these future officers unhear.

Trump lied that he had completely destroyed ISIL (which conducted 500 attacks in northern Iraq in the first quarter of 2020). He lied that Iranian Gen. Qasem Soleimani, whom he boasted of having whacked, was a "terrorist." He was not. He was the head of a state military. Terrorists are private citizens who commit violence against civilians to achieve political purposes. Muddying the waters but terming one's military adversary a "terrorist" is just propaganda, and the cadets don't need to hear that from their president. Moreover, it was shameful that Trump ordered the US military to assassinate Soleimani, who had just flown a commercial jet into Baghdad International Airport to conduct peace negotiations via the Iraqi prime minister with Saudi Arabia. Trump at the time lied that he had been coming to kill Americans, which the Pentagon has refused to back him up on

Even the language Trump used about the US military was shameful.

One of the only two generals Trump mentioned was George S. Patton, with whom he has an infatuation. Patton was a great war hero in fighting the Nazis, though his achievements were not as great as Soviet generals on the Eastern Front. But his more balanced colleague Gen. Omar Bradley described him as "colorful but impetuous, full of temper, bluster, inclined to treat the troops and subordinates as morons. He was primarily a showman. The show always seemed to come first... Patton did not understand post-traumatic stress disorder and saw soldiers suffering from it as cowards, slapping two of them in the hospital in Sicily. But the real problems came after the war when he was supposed to be implementing denazification in Bavaria. Patton wasn't buying it. He valued the Nazis as of 1945, as allies against the Soviet Union, against which he now wanted to go to war. Most disturbing of all was his vicious anti-Semitism and penchant for blaming the Jewish victims of the Holocaust, many of them still living in squalor in camps under his administration. (Many were not rescued from the camps until 1947, when they began being taken to Israel).

" He was unable to imagine that people living in such misery were not there because of their own flaws. The displaced Jews were 'locusts,' 'lower than animals,' 'lost to all decency.' They were 'a subhuman species without any of the cultural or social refinements of our times,' Patton wrote in his diary. A United Nations aid worker tried to explain that they were traumatized, but 'personally I doubt it. I have never looked at a group of people who seem to be more lacking in intelligence and spirit.' (Patton was no friend to Arabs, either; in a 1943 letter, he called them 'the mixture of all the bad races on earth.')"

Not in his drive to fight forever wars, not in his wretched treatment of the men under his command, not in his shameful abuse of traumatized, hospitalized soldiers, and not in his virulent racism, is Patton a figure to be held up to our West Point graduating class as an ideal.

Trump also praised Gen. Douglas MacArthur, again, a great military figure, but what was highlighted was MacArthur's determination to take the Philippines, which had been a US colony, back away from Japan during World War II. Bruce Lloyd interviewed Northwestern U. historian Daniel Immerwahr about of the original US conquest of the Philippines, 1898-1904, quoting him as saying, "In the Philippine war ... it seems at moments like a race war. It seems like [the American] soldiers were taking a fair amount of glee in torturing Filipinos and their meeting military setbacks with sort of exterminate them all retribution. The soldiers do not carry out an exterminationist agenda in the Philippines, but it seems that some of them really wanted to. You'll hear about the Philippine war, but there is alarmingly very little coverage of what happens next."

Is this what Trump meant when he spoke of "legends who unleashed the fury of American artillery upon our enemies on remote islands and distant shores . . . the infantry whose very sight meant liberation was near"?

It has to be noted that the US Congress wanted to give the Philippines independence in 1933, but MacArthur was part of a cabal that convinced President Herbert Hoover to veto the measure, keeping Filipinos under colonial rule. MacArthur, like Patton in Germany, was reluctant to see collaborators with Imperial Japan punished, and promoted one of them into the presidency of the Philippines when it finally gained independence in 1946.

Lloyd quotes Immerwahr as calling the WW II story Trump was so proud of "the bloodiest thing that ever happens on U.S. soil ...What's so painful about it is the complicity of Washington in those war deaths, because a lot of those folks who died, died both as the result of U.S. grand strategy and also died in some cases from friendly fire ... And the fact that this was just blithely passed over on the mainland, doesn't even count as part of U.S. history, struck me as completely unacceptable." Immerwahr estimates that 1.1 million Filipinos and US nationals died during WW II in the Philippines, and all most historians can talk about is MacArthur and his daily mood changes.

That America had colonies is shameful. Our country was founded on the principle of no taxation without representation, but we ruled the Philippines brutally in the service of a business clique of sugar plantation owners. MacArthur's efforts to free the Philippines of Imperial Japanese rule during the war are praiseworthy, but the whole episode of American in the Philippines is nothing to boast to cadets about.

I am afraid that our officer corps has ratcheted further and further to the political right wing in the past 50 years. Back in the 1950s a lot of military people were Democrats. We have had great generals in our history who have unmixed records as proponents of liberty and the constitution. Omar Bradley in 1951, for instance, famously opposed extending the Korean War into China, saying, "The wrong war, at the wrong place, at the wrong time, and with the wrong enemy" Those aren't the ones Trump wants us to glorify."

Related Topic(s): Dementia; Military; Speech; Trump Liar; Trump Presidency; West Point, Add Tags
Add to My Group(s)
Go To Commenting
The views expressed herein are the sole responsibility of the author and do not necessarily reflect those of this website or its editors.