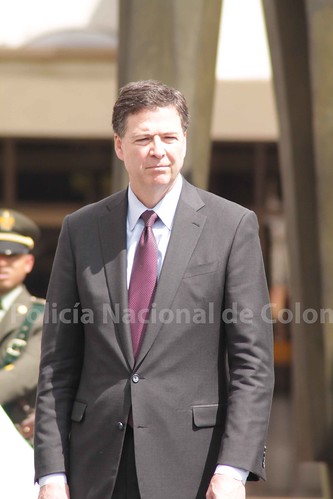 Whatever else you can say about Trump (don't get me started), he's a first-class troll: citing Comey's handling of the Clinton email probe in the last days of the campaign as his reason for firing him! The very action Trump had long praised as a "gutsy" move by Comey, one which redeemed him in Trump's eyes. That's some high-grade mendacity there, transparently false, yet told with a straight face, and pretending it was on advice of the Attorney General.

People will say it's a bad move by Trump, drawing even more attention to the Russian probe the FBI was carrying out. And in conventional terms, it is a stupid, self-defeating act. But it could also be seen as part of a long-term Trump team strategy to tear everything down, rendering the nation's institutions, laws and established procedures to piles of ruin, covered with steaming piles of bullshit, absurdity and chaos. And what happens to nations and societies in ruins? Why, "strong leaders" must step in, with a strong hand -- a free hand -- to "do what it takes" to "restore order."

Trump has actually been pretty open about his desire to be such a figure, and of course his vizier Bannon is even more candid about his desire to "destroy the administrative state" and build a new, nationalist order. We're not just through the looking glass these days -- we've shattered it to pieces and are rocketing into the unknown at a thousand miles an hour. So I'm not sure similar scenarios from the past (Nixon's 'Saturday Night Massacre,' for example) are reliable guides as to how this will play out.

Meanwhile, under cover of the carnival noise, Trump's generals are getting ready for a new "surge" in Afghanistan, arming the Kurds (threatening conflict with Turkey), massing tanks and material in on the Syrian border in Jordan, massacring more civilians in Yemen and Somalia, and in general getting ready to make major murderous mischief across the planet.(Even more than the usual never-ending bipartisan-backed belligerence, I mean.) Not to mention setting the berserkers of our militarized police loose on the populace, under the watchful eye of the tiny Confederate general Trump made Attorney General. And preparing to transfer $5 trillion from the public purse to the super-rich. And seeking to strip millions of people of healthcare in order to " give tax cuts to the super-rich. And so on and on and on.

Trump is spreading so much ruin so quickly across so many fronts that the firing of an FBI Director is little more than a sideshow. But you can bet it will be the focus of the "Resistance" -- as some of our media-political elites like to call themselves these days -- as the other depredations roll on.

Chris Floyd is the Editor and co-founder of Atlantic Free Press. He is an American journalist now based in Great Britain and the UK correspondent for Truthout.org. For 10 years, he wrote the weekly Global Eye political column for The Moscow Times (more...)
Related Topic(s): Comey Firing, Add Tags
Add to My Group(s)
Go To Commenting
The views expressed herein are the sole responsibility of the author and do not necessarily reflect those of this website or its editors.

Extraordinary Measures: Shredding the Curtain of an Enduring Atrocity

Curtains for Comey: Rocketing Through the Looking-Glass With the Troller-in-Chief

The Whirlwind and the Candle: Terror as a Policy Tool - Chris Floyd - Empire Burlesque - High Crimes and Low Comedy in t