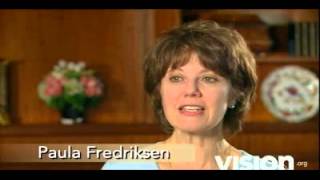 Duluth, Minnesota (OpEdNews) December 12, 2018: Paula Fredriksen's book Paul: The Pagans' Apostle (Yale University Press, 2017) is remarkably accessible for such a scholarly work. Her thesis is that Paul the Apostle "lived his life entirely within his native Judaism" (page xii). However, unlike the historical Jesus, who taught his fellow Jews in Aramaic, "Paul taught, thought, and heard [Jewish] scripture in Greek" (page 1) -- and preached to first-century Greek-speaking people in the Roman Empire.

The Hebrew scriptures had been translated into Greek. The Greek version is known as the Septuagint. Fredriksen points out that in the Septuagint translations, "Greek theological, philosophical, and political vocabulary intimately shaped the new literary presentation of the Jewish god [sic]" (page 39).

Throughout her book, Fredriksen frequently avoids the typographic convention of capitalizing the term "God" as a way to jolt us back into the first-century thought-world. In that thought-world, gods and other spirits were thought of as person-like personifications. In a certain sense, you could say that people in the first century lived in a kind of personalistic thought-world -- a highly animated thought-world.

However, after the Gutenberg printing press emerged in the mid-1450s, that centuries-old animated thought-world tended to fall out of favor in the prestige culture in Western culture. Even though Fredriksen does not happen to advert explicitly to the influence of the Gutenberg printing press in Western culture, she says, "Our Western, post-Enlightenment culture defines 'religion' as something personal, private, and largely propositional -- we 'believe in' or 'believe that,' which are mental operations. This [way of defining religion] obscures the ancient correspondence of heaven and earth, when peoples and their gods came bundled together, and when DOING (as opposed to [primarily] 'thinking') articulated this earth-heaven connection" (page 58; I have used capitalization here to replace her italics).

Now, as I write, the conservative columnist Ross Douthat has just published a column titled "The Return to Paganism" in the New York Times (dated December 12, 2018). For many orthodox Christians and Jews today, there may be a certain shock value to his title "The Return to Paganism." But what exactly was paganism in the ancient world in which Judaism and Christianity emerged historically? Fredriksen devotes a great deal of time and effort to delineating ancient paganism.

Among other things, Fredriksen says, "'Belief' as moderns view it, the sincerity or authenticity or intensity of some inner disposition or psychological state of an individual believer [involving, for moderns, both 'belief that' and 'belief in'], is not native to this world view [in the first century]. Ancients focused rather on acts of deference, on offerings, or on what we might designate 'cult,' which enacted affection and esteem. A person's pietas (Latin) or eusebeia (Greek), which come into English as 'piety,' indexed a person's attentive attitude toward and fastidious execution of his or her inherited protocols [demonstrating respect for and loyalty to their gods]. (Gods cared about such honors, and were usually quick to let their displeasure be known were some offering somehow unacceptable. For good reason, a synonym for eusebeia was phobos, 'fear.') Fides (Latin) or pistis (Greek) in antiquity meant not 'belief' (another frequent modern translation) so much as something akin to 'steadfastness' or 'fidelity toward' or 'conviction that' (cf. Hebrew emunah). To have pistis in one's Patrai ethe does not mean 'to believe in ancestral customs' so much as to have confidence in them (namely, that these customs did indeed please the god), to trust in them, and to execute them 'faithfully,' that is, with care and with respect" (page 36).

Now, over time in the Christian movement, a collection of selected writings in Greek by Paul and certain other authors in the ancient Roman Empire emerged as the official orthodox Christian anthology known as the New Testament. In the Roman Empire, Greek still served as a lingua franca.

But the New Testament did not emerge overnight. Instead, it emerged over the centuries after debates about which writings should be included in the collection of texts that should be accepted as authoritative. For various reasons, certain texts were deemed unacceptable and excluded from what eventually emerged as the official orthodox Christian anthology of acceptable texts. For an accessible account of certain excluded texts, see Elaine Pagels' book The Gnostic Gospels (Random House, 1979).

In any event, Fredriksen sees herself as interpreting Paul's genuine letters in an effort to counter what she sees as certain mistaken tendencies in the interpretation of Paul. She claims that certain features of his letters "took on the pattern of polarized opposites: Law OR gospel; works OR grace; and, as Paul's later theological champions would characterize his position, Judaism OR Christianity" (page 173; I have used capitalizations here to replace her italics). No doubt that pattern of polarized opposites contributed to the anti-Semitism in the Christian tradition. For a detailed account of that tragic tradition of anti-Semitism, see James Carroll's book Constantine's Sword: The Church and the Jews: A History (Houghton Mifflin, 2001).

Now, Fredriksen says, "Paul would not have recognized his message in these rigid polarities. He conceived of his mission to the pagans as entirely consistent with God's promises to his own people, Israel" (page 173).

As Fredriksen explains, ancient Jews saw other ancient people's gods as idols. Other ancient people created vivid concrete images of their gods. But the ancient Jews had a prohibition against such images. Fredriksen says, "'No images' had been part and parcel of the Sinai revelation [to Moses in Exodus 20:4-5]" (page 41). She also says, "An idol is a dumb image" (page 40). Throughout her book, she refers in various places to the "Jewish tradition's long-standing aniconism" (page 41) and to the ancient Jewish "cultic aniconism" (page 41).

The Greek phonetic alphabetic writing added vowels. By contrast, the ancient Hebrew writing system involved phonetic writing, but without explicit letters for vowels. Nevertheless, we should note that the ancient Jewish prohibition against images, in effect, served to distance ancient Jews from what Havelock describes as imagistic thought.

Related Topic(s): Anti-semitism; Belief; Christianity; Culture; Moses; Pagan; People; Plato; Theologians; Theology; (more...) Writing; Writing, Add Tags  (less...)
Add to My Group(s)
Go To Commenting
The views expressed herein are the sole responsibility of the author and do not necessarily reflect those of this website or its editors.