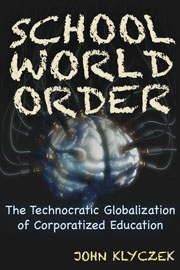 Democratic presidential candidates, such as Elizabeth Warren , have pledged to fix the American education system by replacing privatized charter schools with "community schools" that incorporate "socioemotional-learning (SEL)" programs. These "Democratic" community schools, which teach "social skills" and "emotional competencies," might sound like "liberal" or "leftwing" education reforms. But don't be fooled by the pathos of such leftist "social justice" rhetoric. The Democrats' socioemotional community-learning centers are no more "progressive" than corporate-fascist charter schools.

Both charter schools and community schools are public-private partnerships between businesses and government agencies that "pipeline" students into "career pathways" curriculums assigned to fill workforce development quotas which have been budgeted for managing a planned economy. At the same time, these workforce "pipelines" and "pathways" at both charter and community schools are being contracted to syphon public tax dollars to pay privatized socioemotional-learning companies to administer SEL services through computerized educational technologies which data-mine the psychometrics of students' "learning algorithms" so that corporate industries and government bureaucracies can prescribe "personalized" workforce-competency lessons tailored to the SEL metrics of each student's psychological profile.

It should be no surprise, then, that hi-tech SEL is advocated not only by neo-liberals like Warren, who champion community schools, but also by corporatist neo-conservatives such as President Trump and his Secretary of Education, Betsy DeVos, who promote charter schools. While Senator Warren's campaign website hypes "community schools" that "[e]xpand the implementation of . . . Social Emotional Learning," Secretary DeVos has long been endorsing socioemotional-learning as she posted the hashtag "#SEL" in a 2018 Tweet from the official Twitter account of the US Department of Education.

In brief, proponents of SEL on both the right and left wings of the political aisle are making the case that students cannot reach their full intellectual, or "cognitive," potentials as learners if they have "mental health" impediments resulting from emotional difficulties caused by social stresses, temperamental "disorders," or other neuropsychological "disabilities." As such, both Democrat and Republican SEL advocates are supporting school reforms that hire private companies to data-mine student psychometrics in order to identify which students are in need of emotional, cognitive-behavioral, or psychosocial therapies that will purportedly optimize their learning potentials.

It is certainly true that the logic of a student's mind is optimized when it is not bogged down with the cognitive dissonance of low self-esteem from social ostracization or neuro-temperamental "disability." However, the corporate-government data-mining of student psychometrics will only further impede a student's academic self-esteem by over-pathologizing his or her "social" and "emotional" performances at school. Therefore, SEL data-tracking is not geared to therapeutically remedy students' low self-esteems so that they can maximize their learning powers in order to freely climb up the socioeconomic ladder by following the reason of their own consciences. Rather, SEL data-tracking is engineered to empirically pathologize student learning so that workforce-schooling partnerships between Big Business and Big Government can "scientifically" diagnose students as socially or emotionally "unfit" for certain job castes in a technocratically planned economy.

There is no doubt that Billionaire Betsy DeVos is the queen of "school choice" privatization as she has dumped millions of her own dollars into the funding of charter school companies which push "competency-based" workforce training through "career pathways" curriculums managed by unelected corporate councils that are subsidized by public tax dollars. DeVos's charter choice industry is indeed an assault on public education; but if you're hopeful that the Democrats' community-schooling reforms will put an end to education privatization and thus restore the publicly elected schoolboard system to local "communities," take a closer look at Warren's education plan.

According to the official "Warren for President" website, the Democratic Senator pledges that her community schools will "[p]rovide better access to career and college readiness"by " dramatically scaling up high-quality apprenticeship programs with a $20 billion investment that will support partnerships between high schools, community colleges, unions, and companies" while "leverage[ing] existing federal programs to facilitate education-to-workforce preparedness." Stated differently, Warren's "community" education plan will spend $20 billion of the federal budget to subsidize corporate workforce training through public-private partnerships between schools and companies. Hence, despite the "communitarian" labeling, Warren's community-schooling reforms are essentially no different from the charter-schooling policies of Secretary DeVos, who has proclaimed that "[t]he best workforce is an educated workforce, and this Administration is committed to increasing access to career and technical education for college students and adults alike. By encouraging public-private partnerships, we can help connect students with prospective employers and provide those students with the necessary skills to find a good-paying job in their communities."

Take a closer look at community-schooling legislation, which clearly defines community schools as "public and private partnerships" between businesses and government agencies contracted together to streamline "workforce" development through "pipeline services." According to the Every Student Succeeds Act (ESSA), community-schooling "pipeline services" are basically synonymous with charter-schooling "career pathways," both of which are polytechnical job-placement programs managed by public-private school-to-work partnerships between politically connected corporations in bed with state and federal governments:

· Under Section 4625, ESSAmandates that federally granted community schools must stipulate the particular "pipeline services [that will] be coordinated and provided by the eligible entity and its partner entities" in order to facilitate the "comprehensive services" listed in Section 4623.

[t]he term "pipeline services" means a continuum of coordinated supports, services, and opportunities for children from birth through . . . career attainment. Such services shall include . . . the following: . . . (C) Support for a child's transition . . . into the workforce . . . (E) Activities that support postsecondary education and workforce readiness, which may include job training, internship opportunities, and career counseling. (F) Community-based support for . . . students who are members of the community, facilitating . . . success in postsecondary education and the workforce.

In sum, community-schooling "career attainment" through "pipeline services" is the functional equivalent of "cradle-to-career" charter schooling through "career pathways" curriculums. Regardless of which way the rhetorical labels are spun, both "Democratic" community schools and "Republican" charter schools are public-private partnerships between government bureaucracies and crony-capitalist companies that pipeline students into career-pathways job placement to fulfill the workforce-development quotas which have been predetermined by a planned economy.

If there is any substantive difference between community schools and charter schools, it is perhaps that the former is legally required to incorporate an array of public-private health and social services through "lifelong learning" programs that conglomerate workforce planning and healthcare into a single "educational" apparatus. By blurring the lines between economic management and health and human services under the singular banner of "education," community SEL schools can streamline their career and healthcare pipelines through public-private partnerships with education-technology corporations that provide medical treatments to enhance school-to-work learning through socioemotional accommodations, such as occupational therapies prescribed according to each student's digitalized psychological profile tabulated by ed-tech data-mining.

Section 4622 of the ESSA law states that, in addition to "job training" and "career counseling," community-schooling "pipeline services" include "(G) Social, health, nutrition, and mental health services and supports." By bundling "job" and "career" services together with "social" and "health" services, ESSA's community pipelines convert schools into public-private headquarters for managing a planned economy through medical services administered to psychologically and socially engineer the student body into a workforce caste collective.

Related Topic(s): Charter Schools; Community-based Economics; Corporations; Data-mining; Democrats; Disabilities; Emotions; FOCUS; Medical; Parents; (more...) Pipeline; Privatization; Republican; Software; Students; TEACHER; Workforce US, Add Tags  (less...)
Add to My Group(s)
Go To Commenting
The views expressed herein are the sole responsibility of the author and do not necessarily reflect those of this website or its editors.