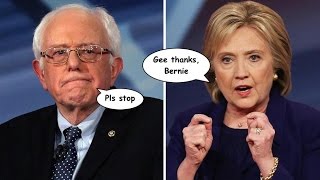 The media has declared the Democratic presidential race over, even though no candidate has won a majority of the delegates. The Democratic establishment is in a tizzy about polls showing Republican presidential candidate Donald Trump running even with Democratic candidate Hillary Clinton, although that mostly reflects Republicans consolidating, however reluctantly, behind Trump.

Clinton surrogates and operatives are pounding on Bernie Sanders to get out of the race, claiming they want to unify the party even as they excoriate Sanders and scorn his supporters. Perhaps it is time for a little common sense about the campaign.

-- A race isn't over until someone wins.

This isn't complicated. When the primary season ends, neither Sanders nor Clinton will have won the majority of pledged delegates needed to win the nomination. Clinton is likely to end with more pledged delegates and more total votes; Sanders, particularly if he astounds in California, will have shown increasing momentum and popularity. Super delegates -- who make their own decisions on whom to support -- will decide the nomination. They can change their minds until they vote at the convention.

-- Sanders is playing by the rules.

For all the animus directed at Sanders, he's playing by the rules set up by the party. He's competing in primaries and caucuses, including the Byzantine ways state conventions sort out delegates long after the primary is over. He's intent on making an appeal to the Super delegates who will decide the nomination. A vast number of them committed to Clinton before the race even began. They are free to change their minds; Sanders and his supporters are free to try to convince them to do so. Those are the rules of the race.

-- Sanders has a strong case to make.

As James Zogby argues at the Huffington Post, the Sanders phenomena is real. He was dismissed as a "fringe" candidate when the race started. Clinton had all the money, the endorsements, the operatives and had virtually cleared the field. Sanders was scorned as a socialist outsider who whimsically thought he could fund his campaign with small donations. A white male septuagenarian from a white state, he had little reach into communities of color.

What resulted is astounding. His independence and the integrity was established by not taking big money and galvanized young people and independents. He's been winning their votes 3 to 1. He gained steadily among young people of color. Now he is running neck and neck to Clinton in California, with one of the most diverse voting populations in the country.

He is the only remaining candidate viewed favorably by most Americans. Clinton's weakness is a mirror to these strengths. After a quarter century in Washington, she is part of an establishment that is widely seen as failing most Americans. She's viewed unfavorably by most Americans, with record negatives exceeded only by those of Donald Trump. Americans doubt her trustworthiness and honesty. She's made herself the candidate of continuity at a time when the country is demanding change. Her big money fundraising has turned into an embarrassment, not an asset.

Not surprisingly, Sanders runs better against Trump than Clinton does in early polls.

Particularly if he wins California, Sanders has a strong case to make to Super delegates that he is the stronger candidate -- and that is before we know what the FBI inquiry on Clinton's handling of classified information will produce.

-- Sanders is mobilizing interest and voters.

Even with the media declaring the race over, Sanders continues to draw stunning crowds. Young people continue to rally to his call. Democratic registration is soaring in California, as the Sanders campaign works to attract new voters.

And this isn't due to Sanders good looks. His bold ideas inspire -- and meet real needs: Medicare for all, Tuition free college, $15.00 minimum wage and a union, enhance Social Security benefits, act on climate change, rebuild the country, end our ruinous trade policies, progressive tax reform and big money out of politics.

Related Topic(s): Bernie Sanders; Hillary Clinton; Politics; Presidential Campaign Democratic, Add Tags
Add to My Group(s)
Go To Commenting
The views expressed herein are the sole responsibility of the author and do not necessarily reflect those of this website or its editors.