Clash of the Half Wits 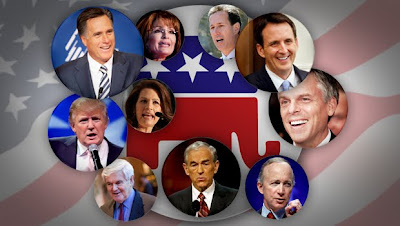 (Image by Unknown Owner)   Details   DMCA
The campaign of 2012 kicks off tonight with the first GOP debate in New Hampshire. For those of you who are insatiable fans of unintentional comedy ( as I am ) the festivities will be carried live by CNN at 9:00 EST. This ought to be good!

The title of this piece, "Clash of the Half Wits", is somewhat of a misnomer. It must be conceded that Mitt Romney, Ron Paul and Newt Gingrich are fairly astute guys. The problem is the fact that Paul is a tad dotty, and Gingrich is as corrupt as they come. That leaves us with Romney. I'll be honest with you: Of any potential GOP candidate to seek the Oval Office, Mitt is the first one since Gerald Ford whom I can honestly say that I won't lose a lo t of sleep over if he is elected; certainly not as much as I lost during the years 2001-2008. Although I could never vote for him, he really is much more moderate than anything that party has vomited out onto the national political stage in a generation or more.

Mitt Romney's problem is that his "moderateness" is perceived by the Republican base as left wing extremism. Add this to the fact that he is a Mormon and you can come to no other conclusion than that he has four strikes against him. If the religious bigots who have hijacked "the party of Lincoln" end up giving him the nomination, it will only be out of sheer desperation. But I just can't see that happening.

Then the re is the Health Care plan he offered the people of Massachusetts when he was governor. It actually inspired the Big Black Bolshevik Boogieman who currently resides at 1600 Pennsylvania Avenue. Tim Pawlenty is now referring to it as " Obomney Care ". No, I think we can write off poor old Mitt. 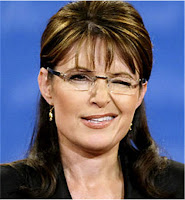 Then the re is the "Palin factor". As I've fantasized before, my dream would be for her to get the nomination. Not only would the candidacy of Sarah Palin guarantee the reelection of Barack Obama, it would be a months-long holiday for political satirists everywhere. Just think how mind-numbingly twisted her campaign might be? I wou ldn't even have to touch my keyboard from convention to election. These things would literally write themselves!

When you wish upon a star , makes no difference who you are....

Although she hasn't officially announced yet ( C'mon, Sarah! ) she is making all the moves that would anticipate her throwing the proverbial hat into the ring. Her idiotic sycophants have even produced a movie (I'm hard-pressed to refer to it as a "documentary") that praises her as the best thing to happen to American politics since the invention of the hanging chad. The title of the film? GET THIS: "The Undefeated". No, I'm not making this up. I'm just not that clever.

(Image by Unknown Owner)   Details   DMCA
Recent days have seen a decided chasm in the relationship between Sarah and her com patriot in idiocy, Michele Bachmann. The first volley was fired off by Bachmann spokes-dude and GOP strategist Ed Rollins on MSNBC's Hardball when he told Chris Matthews that Palin should not be taken seriously. It was a remark that riled the feathers of Fascist Barbi's camp as you might imagine. I'm positively giddy with anticipation at the very thought of watching the two of them trying to take each other down.

Like a bolt out of the view, fate steps in to see you through.

Last week saw the utter implosion of the campaign of Newt "The Hoot" Gingrich. It really was something to behold: His entire campaign staff quit on him. It doesn't get much better than this, does it? But our man Newt is gonna keep on keepin' on. He told the Los Angeles Republican Jewish Coalition the other day that he has no intention of giving up - and I believe him. Hang in there, Newt!

I cannot wait for this debate tonight. Not in my lifetime has a more colorful assortment of reactionary freaks and fools gathered in one place to debate "affairs of state". The comic possibilities are endless. Hopefully enough people will tune in to take a good look at what has happened to that party. This is too good to describe.

As of this hour, Texas governor Rick Perry is contemplating getting into the race: RICK PERRY??? Oh, please, fate.

When you wish upon a star your dreams come true.

The Republican Presidential Debates
Tonight at 9;00 EST on CNN

Classic comedy in the making!

Tom Degan is a former Green Party candidate for New York State Senate. He writes on a blogsite called, The Rant by Tom Degan. He is the recipient of the Presidential Medal of Freedom.....Okay, he didn't really receive the Presidential Medal of (more...)
Related Topic(s): Debate; Hardball; Palin; Politics, Add Tags
Add to My Group(s)
Go To Commenting
The views expressed herein are the sole responsibility of the author and do not necessarily reflect those of this website or its editors.