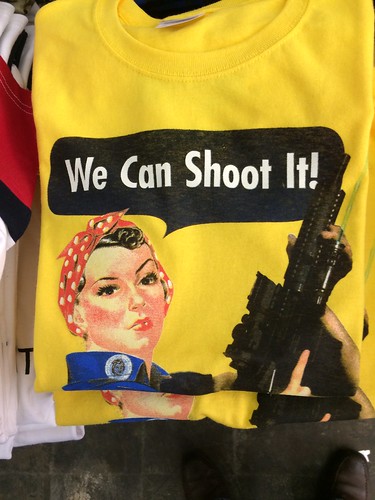 We Can Shoot It!
(Image by Chasqui (Luis Tamayo))   Details   DMCA

According to Wikipedia the Silver Legion of America, commonly known as the Silver Shirts, was an underground American fascist organization founded by William Dudley Pelley around 1933. These white supremacists and anti-Semites wore a silver shirt with a blue tie, along with a campaign hat and blue corduroy trousers with leggings. By 1934 they claimed to have had around 15,000 members, and they competed with the German-American Bund movement for notoriety. Around 1935, the group got mining fortune heiress Jessie Murphy to allow them to use her 55 acre ranch as their new fortified world headquarters, after of course, the expected fascist global conquest. Pelley ran for president of the U.S. in 1936 on a third party ticket, hoping to seize power in what he labeled a 'Silver Revolution'. It took the Japanese attack on Pearl Harbor and Hitler's declaration of war against the U. S. to signal the end of this movement... or did it?

The Unite the Right rally in Charlottesville in August was the largest, most violent assembly of white supremacists in decades. The rally and march was at first organized by ex-U of Va. student Jason Kessler, who had recently founded the far right Unity and Security. A new player in this neo-nazi revitalization in America is this Identity Evropa, an influential white supremacist group operating in our nation. They have been targeting college students with a sophisticated assortment of racist flyers. According to the Anti-Defamation League, in the first weeks of the 2017-18 school year, Identity Evropa posted fliers on 13 college campuses in seven states. These campuses are not just in the south. In addition to the University of Virginia, Lynchburg and Liberty in Virginia, Eastern Michigan, the University of California Irvine, and Bristol Community College in Mass. have been visited by this group. Added to this frightening mix of neo-nazi hate, another far right group are joined in this revival: American Resistance, led by Jared Taylor, using racist posters that have co-opted some of the most iconic images of the 20th Century, including that of WW2 anti-German Rosie the Riveter, which read " We can do it!" replacing it with "Don't apologize for being white!". Identity Evropa was founded in 2016 by ex-Marine Nathan Damigo, who was 'other than honorably discharged' from the Marines in 2007, and then served five years in prison for robbing a man he believed was Iraqi. Damigo read KKK leader David Duke's book, My Awakening while in jail, and you know the rest.

The goal of these new neo-nazi groups is to not only look like white college frat boys, but recruit them, along with equally 'whitebread' women. What is interesting is the fact that these young people, like millions of their peers, do have reason to be angered and frustrated by this Military Industrial Empire. They have been foolishly diverted away from the real cause of their problems, and have resorted to scapegoating in the opposite direction. The August torchlight march in Charlottesville showed just how 'collegiate' many of these kids appeared to be. They began shouting 'Blood and Soil', which derives from the nazi use of the 'Blut und Boden' references to the 19th century German ideal of a racially defined nation. These young kids, who our president (recently called a moron by his Sec. of State) labeled as 'Nice', also shouted 'Jews won't replace us'. Nice kids, hah? Wonder how the far right wing Israelis digested all of that? What a sick joke! No, this was and is not a joke! This is real! This is what our Military Industrial Empire has spiraled down into: A beginning of a Fourth Reich! The real question is, who is really behind all of this madness? Who made sure that the Charlottesville marchers and the larger group of anti-nazi protestors were not properly separated from each other? Where is the outrage from the (most likely) millions of Jewish Americans who supported (and still support) Trump when he 'gave a pass' to the far right marchers? Where were the resignations from every Jewish member of his cabinet, and for that matter, every member of his administration, if they have even a segment of historical knowledge of the German Nazi movement? How can we ever reach those young white kids who are attracted to such nonsense, if not for our leaders to react with vigor?

Evil flourishes when good men do nothing.

{Philip A Farruggio is the son and grandson of Brooklyn, NYC longshoremen. A graduate of Brooklyn College ( class of '74 with a BA in Speech & Theater), he is a free lance columnist posted on World News Trust, Nation of Change Blog, Op Ed (more...)
Related Topic(s): Fascist; Ku Klux Klan; Marines; Military; Students, Add Tags
Add to My Group(s)
Go To Commenting
The views expressed herein are the sole responsibility of the author and do not necessarily reflect those of this website or its editors.