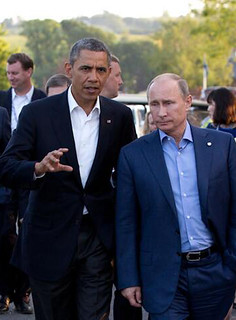 Barack Obama and Vladimir Putin
(Image by theglobalpanorama)   Details   DMCA
>
Russian President Vladimir Putin's message at the UN General Assembly was stark; either sovereign states get together in a broad coalition against all forms of terror, and the principle of statehood is respected as enshrined in the UN charter -- or there will be chaos.

This UN General Assembly revealed that the Obama administration's perpetual newspeak does not cut it anymore. A review of UN speeches by both Putin and Obama is almost painful to watch. Putin acted like a serious global statesman. Obama acted like a poseur flunking a screen test.

Putin's key talking points could not but be easily accessible to the Global South -- his prime audience, much more than the industrialized West.

1) The export of color -- or monochromatic -- revolutions is doomed.

2) The alternative to the primacy of statehood is chaos. This implies that the Assad system in Syria may be immensely problematic, but it's the only game in town. The alternative is ISIS/ISIL/Daesh barbarism. There's no credible "moderate opposition" -- as there was not in NATO-"liberated" Libya.

3) Only the UN -- as flawed as it may be -- is a guarantor of peace and security in our imperfect, realpolitik geopolitical environment.

Washington believed its own Arab Spring myth in 2011, betting that after Tunis and Cairo, Damascus would fall in a flash.

The Beltway believed its own myth of "moderate rebels" taking power.

The Beltway did not listen to Syrian minorities warning about the danger of an extremist Sunni/Salafi-jihadi take over.

ISIS/ISIL/Daesh -- for all its barbarism -- may eventually win a few battles, but it won't control the whole of "Syraq."

To defeat the cancer, there's only one possibility: a real military campaign conducted by a real coalition including the US, Russia, Iran, Turkey, Saudi Arabia.

Washington though never joins a coalition that it cannot control at will.

Thus a possible road map of what may lie ahead -- as debated by Obama and Putin, face to face, for 90 minutes in New York; a two-headed coalition, one led by the US, the other led by Russia, but "coordinating" on the ground.

Still, Moscow will be struggling to form a wide-ranging coalition duly approved by the UN.

The task is immense. "Syraq" will have to be reconstituted.

Related Topic(s): Bashar Al-assad; Iran; Obama; Syria; Vladimir Putin, Add Tags
Add to My Group(s)
Go To Commenting
The views expressed herein are the sole responsibility of the author and do not necessarily reflect those of this website or its editors.