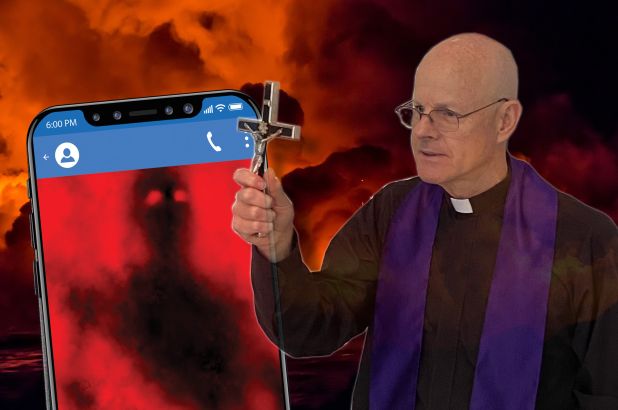 Mark Twain wrote, "Against the assault of laughter, nothing can stand."

Roman Catholic exorcist Monsignor Stephen Rossetti (pictured above) has given Deists the ammunition/material needed for an assault against the ungodly, harmful, deadly, and irrational nonsense of Christianity. Specifically against an essential pillar of Christianity - fear.

Fear is fundamental to Christianity and to all of the "revealed" religions. Fear of death is the most powerful recruitment tool for the clergy. This is because they teach people to fear God who, they claim, casts people into Hell to be tortured for eternity. This anti-God teaching is seen in the writings of the anonymous author of the Gospel of Luke, who at 12:5 wrote that Jesus taught people to fear God because God can kill your body and throw you into Hell where Satan and his demons will burn and torment you.

This weapon in the arsenal of the clergy of fear of Satan, demons and devils greatly benefits the clergy. Rossetti wouldn't have a job as an exorcist if it wasn't for these clergy-created fictional evil beings. He has written a book that spreads this fear of imaginary clergy-created creatures and which benefits both Rossetti and his employer, the Roman Catholic Church, financially.

In his ridiculous new book, Diary of an American Exorcist: Demons, Possession, and the Modern Day Battle Against Ancient Evil, Rossetti claims that one man he was performing an exorcism on had his eyes change color from blue to yellow and his pupils shrunk down to pinpoints. Rossetti claims the man looked "like a hissing snake." (This claim is being made by a man who makes his living promoting a "revealed" religion that claims a snake talked and traveled upright, so it should be taken with a ton of salt!) Another man's eyes, according to Rossetti, turned jet black. He said this convinced him the man was possessed by a demon.

Rossetti not only claims demons turn the eyes of the people they possess different spooky colors, but that those darn demons are now sending text messages! This is a great source of laughter! He wrote about a young woman whom he claims was possessed by demons. Rossetti alleges that her demons would send "snarky" text messages to the woman's father! To exorcise the texting demons from the young woman, Rossetti would say to the woman, "I claim you for Christ Our Savior by the sign of the Cross." The woman would respond with, "I belong to Jesus." Each time she said that, according to Rossetti, "Satan would burn a cross into her [skin] many times until finally he was cast out." Rossetti also stated that the crosses Satan allegedly burned into her skin have since disappeared! I guess Rossetti expects us to take it on faith that he is telling the truth. Without faith/gullibility in large numbers of people, the "revealed" religions will fall. Deism helps people to remove their gullibility, which then causes the gift from their Creator of innate reason to rise to the top, which liberates them from the fear-based and ungodly "revealed" religions. As active Deists, we really do have it in our power to begin the world over again!

Another gift to Deists and to all freethinkers, which empowers us to use humor and laughter to enable people to break free of the mental and spiritual chains put on them by the "revealed" religions, is found in the Bible itself, at Matthew 27:50-53. According to this piece of "holy" scripture, when Jesus died on a cross on a Friday afternoon, dead people who were buried in cemeteries around Jerusalem came back to life and hung out at their graves until Sunday morning when Jesus also allegedly came back to life. At that time, according to this comical and nonsensical Bible story, the zombies from the cemeteries went into Jerusalem and "appeared unto many." Here's an in-depth article about this bizarre Bible claim. And here's a Deism eBooklet with many other cases of unintentional comedy in the Bible and in the Quran!

The revolutionary and Deist Thomas Paine let us know an effective way we should deal with the harmful nonsense of Christianity and of all the various "revealed" religions. In The Age of Reason, The Complete Edition Paine wrote:

"Nonsense ought to be treated as nonsense, wherever it be found; and had this been done in the rational manner it ought to be done, instead of intimating and mincing the matter, as has been too much the case, the nonsense and false doctrine of the Bible, with all the aid that priestcraft can give, could never have stood their ground against the divine reason that God has given to man."

It's important to keep in mind that although the beliefs and teachings of Christianity have foolishness and humor in them, they are also very harmful and even deadly. For example, people, including children, get seriously injured and even killed, through exorcisms, as well as because of religious teachings and beliefs in faith healing.

We need to take to heart this important and life-improving principle from Marie Curie:

"Nothing is to be feared, it is only to be understood. Now is the time to understand more, so that we may fear less."

Bob Johnson is a paralegal and a freelance writer in Florida. He was raised Roman Catholic, but after reading Thomas Paine's The Age of Reason, he became a Deist. In 1993 he founded the World Union of Deists and in 1996 he launched the first web (more...)
Related Topic(s): Catholic; Demonic Possession; Demonizing; Freethinker; Humor; Religious Freedom; Religious Myths_lies; Republican Religious Right Wing Nuts; Self Help- Personal Growth; Unintentional Humor, Add Tags
Add to My Group(s)
Go To Commenting
The views expressed herein are the sole responsibility of the author and do not necessarily reflect those of this website or its editors.