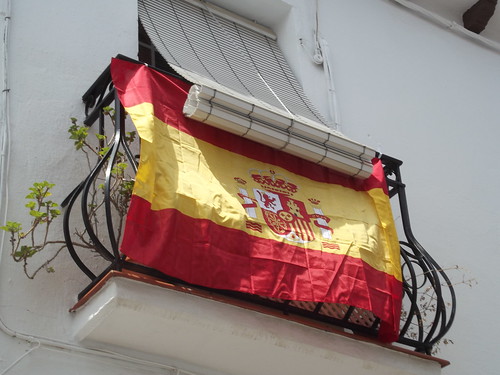 Jefferson-Hancock the moment was not,When the prez of Catalonia turned on a dot,And put independ' on indefinite hold,The one just declared with a flourish quite bold,Which turned out to be but a total lame yawner,And far from "our lives and our sacred honor.". So cheesy it was that Madrid had to ask,Did you guys declare or just pass 'round a flask? For a week the prez has answered a mumble,His allies all huffy, his support all a-crumble,But he knows he's looking at serious hard time,Some ten to twenty on hard beds for his mime.. So the cry has gone up from every Cat station:"It's dialog we need, 'tween nation and nation!"And Madrid replies, "Of dialog we're able,But independence, champ, that ain't on the table."So now these Cat pols find themselves in a fix,Looking at failure and a wall full of sticks.. They're also looking at Madrid taking charge,And in local gov'ment and admin' to barge,Though sore' reluctant to go through with it all,And whack the protesters who look for a brawl,And look bad on TV and put up with the taints,While the separatists end up looking like saints..The irony here is the same folks long-haired,Raised Cain against Franco, about democ' cared,And now a Franco of their own must commit,The difference being that now Spaniards see fitTo fly flags from windows, a sight seen but twice:When Spain won The Cup and this crisis cut-price.

Related Topic(s): Catalonia Catalan; Declaration Of Independence, Add Tags
Add to My Group(s)
Go To Commenting
The views expressed herein are the sole responsibility of the author and do not necessarily reflect those of this website or its editors.