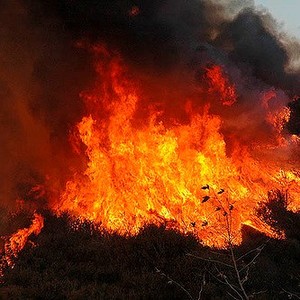 Fifty years ago, in my twenties, I often hitchhiked the Pacific Coast Highway through Southern California. I slept on pristine beaches, swam in the ocean, and spent endless hours watching seals and dolphins ride the waves just a few yards offshore.

A favorite spot was in Santa Monica, where Sunset Boulevard meets the sea at Will Rogers State Park. This gorgeous stretch of white sand, framed by the Santa Monica pier to the south and the Malibu Hills to the north, seemed like paradise.

Today, fulfilling a lifelong dream, I live in the San Fernando Valley, a 40-minute drive from the Pacific, half of which is through beautiful Topanga Canyon.

This past Friday, I set off for my weekly bike ride along the beach. As usual, I parked at Will Rogers and rode my bike south down the concrete path about six miles to the Venice Pier. The final stretch, through Venice Beach, featured a constant cloud of the cannabis smoke that now flows free and easy in the land of legal pot.

At the end of a peaceful afternoon, I rode north back up to Will Rogers (always into the wind) to watch the sunset and take a dip in the ocean, which was, as expected this time of year, warmer than the air.

But this evening there was something else -- an unwelcome terror. Over the ridge, in Malibu and Calabasas, fires were raging, engulfing the entire range of hills and valleys to the north in smoke. The flames were clearly visible as I rode along, all too aware that at that moment, fellow humans were dying, homes and livelihoods were being consumed, and for many people not much different from me, the world was ending.

Earlier in the week, in nearby Thousand Oaks, yet another crazed gunman shot up yet another bar, killing 11 people. Some of the victims were survivors of the Las Vegas shooting a year ago, where more than 50 people died. Now they died here.

I thought about the ocean waves, once so pure, now laced with unseen traces of Fukushima. The March 11, 2011, earthquake there caused three meltdowns and four hydrogen explosions that blew radiation into the air and water far in excess of Hiroshima and Nagasaki. The three melted cores still seeth underground. A constant flow of liquid carries untold isotopes into the Pacific as Tokyo Electric has failed for nearly a decade to permanently cool them.

That witches brew of some of the world's most lethal substances has long since arrived here. Years ago tuna caught off the coast of California were found to be carrying significant doses of identifiable Fukushima contaminants.

I swim anyway. I don't know how much radiation is in those waves. But it's there, as are the twin nuclear reactors just four hours drive north at Diablo Canyon near San Luis Obispo. Thousands of us have been arrested protesting those reactors, capable of making this entire region a dead zone, especially once hit by the "Big One" earthquake we all know will eventually come.

The awful glow of the deadly fires shine through massive clouds of soot and smoke. It's like nothing I've ever seen, a hellish reality in a paradise I once took for granted.

The following afternoon, I find solace in a few blessed hours with my darling grandchildren, playing in an idyllic suburban backyard under pristine blue skies.

And then it arrives. The soot and smoke of the Woolsey fire smacks us in the face. The flames have already torn through Santa Susana, a toxic wasteland whose lethal pollutants -- including radioactive isotopes from 10 small reactors -- may be pouring over Los Angeles. At least 25 people have already died in the inferno, several of them roasted to death in their cars, caught by the rapidly moving flames. Many more are still missing.

Related Topic(s): California Fires; Devastation; Fire And Fury; Fukushima; Radiation, Add Tags
Add to My Group(s)
Go To Commenting
The views expressed herein are the sole responsibility of the author and do not necessarily reflect those of this website or its editors.