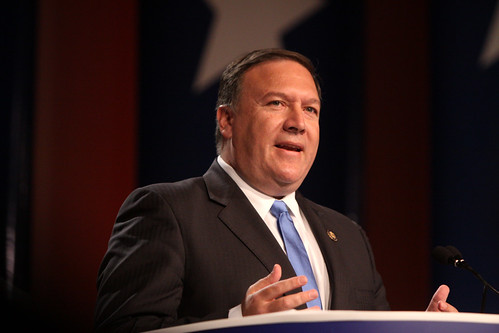 Newly confirmed CIA director Mike Pompeo informed United States senators he would "aggressively seek to ensure we have the most effective programs for identifying insider threats." It was a pledge to pursue the same anti-leaks policies that discourage whistleblowing that President Barack Obama's administration pursued.

Since President Donald Trump has expressed his fervent support for torture, which is against the law, and a draft executive order has circulated suggesting the Trump administration will restore the CIA's rendition, detention, and interrogation program, the prospect of Pompeo intensifying efforts to clampdown on leaks is all the more concerning.

"Mishandling of classified information is a serious matter given the potential implications for U.S. national security," Pompeo declared. "Individuals determined to have mishandled classified information should be treated in accordance with relevant policies and the law, accounting for relevant factors including intent and harm to U.S. interests. Punishment may vary depending on the circumstances of each case."

He called for "more aggressively implementing the Intelligence Community Information Technology Enterprise," which will "enable the electronic implementation of the need-to-know principle." He also mentioned the CIA's own "insider threat program."

Although he mentioned NSA whistleblower Edward Snowden ("the Snowden incident"), he said nothing about how he would ensure there were "proper channels" for whistleblowers to raise concerns about policies and programs they might find to be unethical or illegal. He said nothing about the chilling effect that insider threat programs can have on employees of good conscience, who may decide to stay silent in order to protect their livelihood from being destroyed.

None of the senators on the Senate intelligence committee bothered to ask him about whistleblowing either.

When George W. Bush was president, CIA officer John Kiriakou was the first member of the agency to publicly confirm that waterboarding was official U.S. policy. He believed the CIA was not authorized under the law to torture Abu Zubaydah. In response, Kiriakou was targeted by the Justice Department and pled guilty to confirming the name of an agent involved in the CIA's rendition, detention, and interrogation program to a reporter in violation of the Intelligence Identities Protection Act.

Kiriakou was sentenced to 30 months in prison in 2013. He was jailed at a federal correctional facility in Loretto, Pennsylvania, over one hundred miles away from his wife and five children. He had to mortgage his house, and his livelihood was utterly destroyed.

Jeffrey Sterling, an African American CIA officer, was imprisoned at a federal correctional facility in Littleton, Colorado, about 900 miles away from his wife and family in St. Louis. He stood up to the CIA and brought a racial discrimination lawsuit against the agency in 2002. It was dismissed by the Supreme Court in 2005 after the government invoked the "state secrets privilege."

Kevin Gosztola is managing editor of Shadowproof Press. He also produces and co-hosts the weekly podcast, "Unauthorized Disclosure." He was an editor for OpEdNews.com
Related Topic(s): CIA; Secretary Of State Mike Pompeo; Torture; Whistleblowers-ing, Add Tags
Add to My Group(s)
Go To Commenting
The views expressed herein are the sole responsibility of the author and do not necessarily reflect those of this website or its editors.