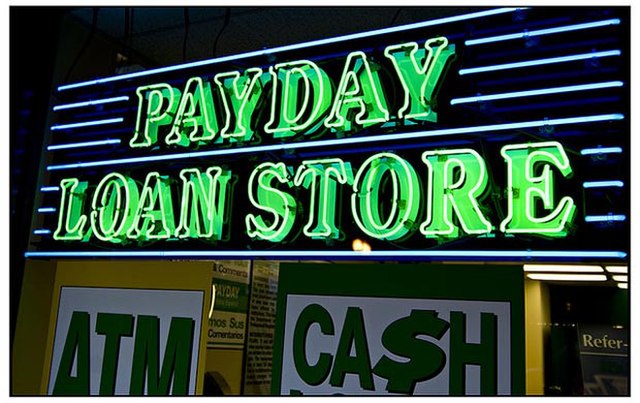 Daniel Press of the Competitive Enterprise Institute calls the US Consumer Financial Protection Bureau's name "the ultimate misnomer." He's right. The "Protection" part only makes sense in the manner of mob racket slang: "Nice loan operation you got there. Be a shame if anything happened to it."

Back when I was in that kind of situation (I distinctly recall once needing to pay for a prescription for a sick toddler, with no health insurance to take the edge off the price) the first-line solution was the local pawn shop. Take something that's worth a little money -- your television, for example -- get the money you need, then pay it back ASAP or over time, with interest, and get your TV back. Or, if you can't manage the payments, it eventually gets sold.

Pawn shops still exist, but I suspect payday lending has cut into their business quite a bit. If you're employed and get a regular paycheck, a payday lender will advance you some money, which you pay back with interest.

Yes, it's high interest by comparison to, say, a home mortgage. Yes, some people get dragged down into recurring cycles of borrow and pay. Being poor sucks. Believe me, I know.

But CFPB's "solution" is far worse than the alleged problem. Their rules just make it harder for you to get a loan, as if some Washington bureaucrat knows your finances and your needs better than you do. You and that bureaucrat have a lot in common: Both of you want to run your life.

People who need money will do what they have to do to get that money. The bottom line of these rules is that CFPB would rather you went to a loan shark, or robbed a liquor store, or sold your children into sex slavery, than paid interest rates they consider too high.

The only worthwhile rule pertaining to payday lending (or any other kind of lending) is to require that lenders be clear and truthful about their terms. Beyond that, the decision to borrow is rightfully yours, not CFPB's.

Related Topic(s): Consumer Financial Protection Bureau; Payday Lenders, Add Tags
Add to My Group(s)
Go To Commenting
The views expressed herein are the sole responsibility of the author and do not necessarily reflect those of this website or its editors.