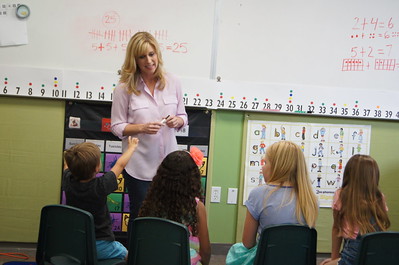 Christy Smith reading to children
(Image by Christy Smith for Congress)   Details   DMCA
"I am committed to Special Education being fully funded. Currently, federal support for special education is pennies on the promised dollar."
-Christy Smith

The CA-25 congressional seat is a former Republican stronghold that has long been targeted by the Democrats. However, despite overtaking the number of registered voters in the district and an electorate that favored Barack Obama in the 2008 election, their efforts were consistently frustrated. The low point came in 2014 when two Republicans advanced to the general election. However, in 2018 the Blue Wave proved to be too strong for incumbent Steve Knight and the Trump apologist went down in defeat. CA-25 turned blue and the Democrats had a new rising star in Katie Hill.

Hill's meteoric rise would end as quickly as it began as the combination of a messy divorce and vengeful conservatives were too much for Hill. After a video was released of the freshman congresswoman in the nude as part of a throuple, there were immediate calls for her resignation. Unlike Republicans, who stand by their politicians even after they are caught illegally using campaign funds to engage in an affair or use the power of their office to smear political opponents, Democrats did what they do best and caved. Hill was out of office.

On Tuesday, May 12, voters will leave their COVID-19 cocoons to name a placeholder for the CA-25 congressional seat until the new congress takes office next January. Trump and the Republicans are eager to take back the seat, but instead of running on actual issues, they have blitzed the airwaves with a strategy out of the president's own playbook. An endless wave of attack ads against the Democratic nominee, Christy Smith, take aim at the former school-board member for actions she took to lead the Newhall School District out of the GOP-induced Great Recession. True to form, these attacks are "distortions [that] are taken out of context and have no connection to reality". Not only were the votes in question bipartisan and unanimous but "every single staff member [who was] given a layoff notice [by the school district] was rehired" as financial conditions improved.

Smith's experience as a representative on a school board and as a member of the California State Assembly's Education Committee is evident in the responses she provided to a series of questions about federal education policy. She notes that local school districts struggle and must use general-fund resources because "currently federal support for special education is pennies on the promised dollar". She pledges to not only ensure that Washington finally lives up to its promise to fund 40% of the average per-pupil expenditure for special education but to examine if that is enough to ensure that the needs of these students are fully served. She also supports "implementing funding formulas that more accurately reflect the specific number of students receiving special education services, the needs of those students, and the costs associated with the specific services being provided".

Having had the experience of another school district authorizing a failing charter school to operate within her district's boundaries after her board had originally rejected the application, Smith authored AB1507, which finally banned the practice. She also co-authored AB1505, which as written would have ensured local control by eliminating the ability of outside agencies to authorize charters rejected by school districts. Unfortunately, Governor Newsom negotiated a compromise that maintained the ability of unelected county boards of education to continue authorizing charter schools. Smith maintains that these measures show that she has been "a champion for charter school transparency in California" ensuring that the financial performance and student outcomes are held to the same standard of accountability as public schools.

Despite two requests, Smith's opponent, Mike Garcia, did not provide answers to the same questions about federal education policy. In fact, his campaign's website does not even mention "education". Apparently, he found it more important to weigh in on the Trump boogeyman subject of "socialism". The CFT president does note that Garcia proposes eliminating the U.S. Department of Education, which "would be a disaster for our students, resulting in the loss of millions of dollars in grants for California children".

(Image by Mike Garcia for Congress)   Details   DMCA
Instead of presenting his ideas on how to improve education for our students in these difficult times, Garcia seems to be relying on Trump's dog whistles. This includes a curious statement on the bottom of a press release emphasizing that the district is "45.8% white" and the obligatory picture of the candidate in front of a wall. The last Republican to hold this seat also sought the support of overt bigots and the voters sent him packing.

The constituents of CA-25 have been given a clear choice, especially when it comes to education issues. They can exercise their right to vote at a vote center on May 12 or protect themselves and their loved ones by voting by mail now.

Question 1: Federal legislation authorizes "Congress to contribute up to 40% of the average per-pupil expenditure" for mandated special-education services. Unfortunately, this funding has never materialized. What will you do to ensure that programs and services for those with special-education needs are appropriately funded?

Christy Smith: "I am committed to Special Education being fully funded as current federal support for special education is pennies on the promised dollar. State and local education budgets struggle to meet the mandated costs of Special Education yet all prioritize ensuring special education students are fully served even when it means extending general fund resources to do so. It is time, not only for Washington to live up to the spending expectation it set for itself, but to examine if 40% is sufficient even if we were to achieve it."

Mike Garcia: Did not answer the question.

Question 2: Currently, special-education funding is based on the total student population instead of the actual population that needs services. What will you do to ensure that funding is actually based on the number of children requiring services?

Christy Smith: "I support implementing funding formulas that more accurately reflect the specific number of students receiving special-education services, the needs of those students, and the costs associated with the specific services being provided."