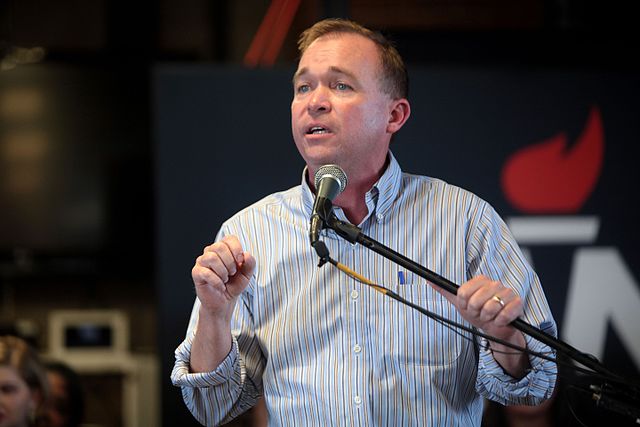 "What you see in this budget is exactly what the president ran on," US Office of Management and Budget director Mick Mulvaney told George Stephanopoulos on ABC's "Good Morning America" in late February.

The president's overall budget proposal is still under wraps and hasn't been sent to Congress yet, but Mulvaney was making the media rounds to flack for its first big component: A $54 billion increase in military spending.

Mulvaney's claim is true as far as it goes. Donald Trump ran for president on a promise to "rebuild" the most expensive war machine in the world, a "defense" establishment that hasn't missed a meal since World War Two and that, if cut by 90%, would still be the first or second largest in the world (depending on what China spends from year to year).

Mulvaney didn't look very happy about it. I don't blame him. As Stephanopoulos pointed out, Trump made a few other promises, too -- and those promises represent an insoluble math problem for the numbers guy.

On one hand, in addition to the increased defense spending, Trump wants a $1 trillion infrastructure program and he's pledged not to touch Social Security or Medicare spending.

On the other hand, he's promised to cut taxes.

Even if his hands weren't so famously small, they'd have trouble holding on to both sets of promises while juggling two more in the air: He's promised to reduce the federal government's annual spending deficit and pay down its gigantic debt.

Yes, the "Laffer Curve" predicts the possibility of increased government revenues from general economic growth after tax cuts, but those numbers still just don't add up. It's not possible to spend more, and tax less, and pay down crippling debt, and bring a runaway budget into balance.

Fortunately for Trump, he has considerable relevant business experience that he can bring to bear on the problem.

Unfortunately for the rest of us, that experience is in the casino industry where, no fewer than four times, he spent enterprises into insolvency then left his partners holding the bankruptcy bag.

I predict that his presidency will bring that number to five.

Related Topic(s): Budget; Budget Bill; Budget Deficit; Mick Mulvaney; National Debt; President Trump, Add Tags
Add to My Group(s)
Go To Commenting
The views expressed herein are the sole responsibility of the author and do not necessarily reflect those of this website or its editors.