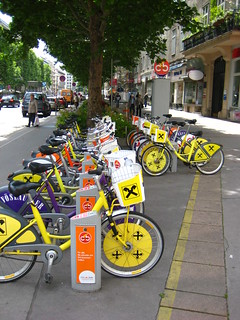 My friend Josh and I have lunch at a Vietnamese restaurant about halfway between the two of us. I drive there-- it takes about 25 minutes. He rides his bike, which takes about 35 minutes.

Today, Josh gave me a challenge. He pointed out that after starting out on the journey of shifting to a plant-based, animal protein free diet I had begun writing about it. He suggested that I try an experiment-- start writing about bike riding. I'd just mentioned that I'd sent my book, Bottom-up, to an agent, and he suggested that bike-riding is bottom-up.

As soon as he suggested it, my mind started racing with possibilities.

I'd been wanting to get into bicycling and here Josh was stimulating me to think about it from a bottom-up perspective. It didn't take much. Using an automobile requires a lot more top-down resources-- oil exploration, drilling and refining costs billions in technology and organizational infrastructure. Cars are manufactured by some of the biggest top-down companies, and financed by banks-- among the first categories of business to be characterized as too big to fail.

Jets and airports are, for the most part, also part of really big systems.

Public transportation is big, but it's built for regular people, so it, at least, has some bottom-up aspects.

The most bottom-up way to travel is to walk, jog, ride a bike or row a boat or paddle a canoe-- or ride a horse. Cross Country skiing could also fit into a more bottom-up category.

Josh pointed out that when he was in high school between the wait for the bus and the ride, it would take him 45 minutes to get to school. He started riding his bike when he realized it only took 15 minutes to get there by bike. And when he lived near Berkeley, going to grad school, he would ride his bike and his roommate would drive. On the way, the roommate would often pass him. But by the time the roommate found a parking space, Josh always arrived in class first.

Then I started thinking about travel-- I mean tourism. I've always preferred to avoid big tourist attractions and big hotels, instead seeking off the beaten track places where I can directly connect with and meet the locals and experience the local food and culture. That's bottom-up. Top-down travel would mean flying somewhere, then staying in a big city at a massive chain hotel, and visiting the giant tourist attractions -- like the Eiffel Tower, the Golden Gate Bridge or the Great Wall of China. I love to see ancient places, especially indigenous ones, thought they don't survive as well as giant castles.

Of course, getting on a plane involves top-down transportation, but once you arrive at your destination you can use a bottom up approach in planning how you experience the place you end up.

And even bikes, can be top down--- some bikes cost more than cars. The most expensive bikes are often custom made-- only affordable for the wealthy.

At the other end, more and more major cities are setting up bike rental systems, where people can, for a few dollars, rent a bike to get from one place to another.

As I proceed on my journey, seeing more ways to embrace and live bottom-up, this is one more aspect that seems to be worth including on the map.

This is another article in a series on bottom-up, which will be used in my book in progress-- Bottom-up; The Connection Revolution.

Related Topic(s): Big Vs Small; Bottom-up; Top-down Bottom-up; Transportation, Add Tags
Add to My Group(s)
Go To Commenting
The views expressed herein are the sole responsibility of the author and do not necessarily reflect those of this website or its editors.