A new book published in May has raised questions about the origins of Lyme disease, which affects 400,000 Americans each year. And this book has caught the attention of Congress, prompting some to ask the question, did the Pentagon weaponize ticks and unleash them on an unsuspecting public? Here to talk about this is Kris Newby, the author of Bitten: The Secret History of Lyme Disease and Biological Weapons. Kris is an award-winning science writer at Stanford University and the Senior Producer of the Oscar shortlisted documentary on Lyme disease, Under Our Skin. Thank you so much for joining me today, Kris.

KRIS NEWBY: Thank you for the invitation. 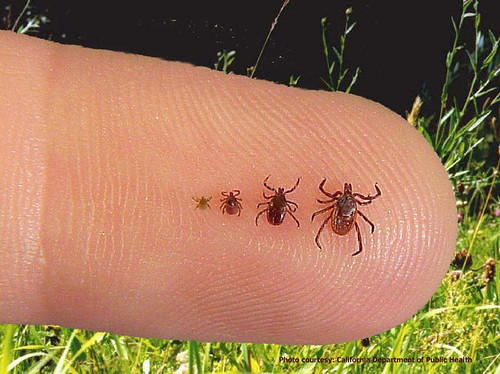 JACQUELINE LUQMAN: So Lyme disease is not a new phenomenon, right? It's not new. It's been around for a long time. But what is it about Lyme disease that has turned more attention on this issue now?

JACQUELINE LUQMAN: Now, that's the secret history of Lyme disease that you talk about in your book that people obviously don't know anything about that ties Lyme disease to the Pentagon and the creation of bio weapons or using ticks and other insects as bio weapons possibly. Can you explain for us what that alleged program was about?

KRIS NEWBY: Well, ticks were used as basically eight-legged soldiers. And the military, the bio weapons headquarters in Fort Dietrich, Maryland, figured out how to put dangerous diseases inside the ticks. And then they had a program where they would drop those ticks on enemy territory from a plane, and then those ticks would be like stealth soldiers and it would be hard to protect yourself from them and they would bite people. And they would either transmit fatal or incapacitating diseases to the local population that would make it easier for an invading army who had been vaccinated to take over the area and less destructive than traditional bombs.

JACQUELINE LUQMAN: Now, I know that for some people watching this, they may say, "Okay, this sounds really ridiculous. Weaponized ticks? Come on now." But there is a key figure referenced in your book who actually lends credence to this idea because this is not something, from what I understand, that you discovered. This was something that you were given information on from this key figure. So who was this person and why is he important to not just this program of weaponized ticks and insects, but also to the history of Lyme disease? Who was this person?

KRIS NEWBY: This person was Willy Burgdorfer, a medical zoologist who came over from Switzerland in 1951, landed in the Public Health Service in Hamilton, Montana that was the number one spot for tick researchand he was very shortly enlisted in the biological weapons program headquartered in Frederick, Maryland. His job was to weaponize fleas, ticks, and mosquitoes by putting dangerous diseases in them so that they could be dropped on the enemies. Now, in 2013, he told a filmmaker and me pieces of the story where he admitted that he had been in the biological weapons program for over 10 years and no one had known that. And he's also the discoverer of Lyme disease, and that's what really made him world-renowned. So for him to say that, that he had been covering this up for so many years, makes it somewhat credible.

JACQUELINE LUQMAN: Now, the Representative from New Jersey, Chris Smith, who is a Republican and has introduced an amendment to have the Department of Defense's Inspector General investigate whether this program actually did exist and whether the Pentagon has weaponized ticks and other insects and unleashed them on the public, has just been voted on and it was proved to be I think the next step is that it would be reconciled to the Senate bill and it may not make it through the full and final defense budget, but it is true that there has been a rise in Lyme disease cases over the past decade or so.

So these two events have coincided, the release of your book and also the rise in Lyme disease cases, which for some people does cause some alarm. As a matter of fact, the CDC has documented this rise in their recent study called "Lyme and Other Tick-Borne Diseases Increasing." Now, they cite that the new germs contributing to Lyme disease and other tick-borne diseases have been identified. The geographic range of the tick population is expanding, and that can be contributed to over-development of wooded areas, destroying the ecosystems of insects and also climate change. But can those contributing factors account for the entirety of the rise in Lyme disease cases? I guess what I'm asking is, can we rule out the possibility that the Pentagon may have unleashed weaponized ticks and other insects onto the American public or in some areas and it got out of hand?

KRIS NEWBY: I think it's absolutely proven that there was a tick weapons program. The outstanding question is, was there an accident where some of the infected ticks got out? And maybe they didn't know they were infected and they were. And there was also aerosolized programs where germs that can be caused by ticks were sprayed over in open air conditions, and did that enter the ecosystem that way? So it can't be ruled out. And there has been a mystery as to why these three new dangerous virulent tick-borne diseases showed up around Long Island Sound. That's New Jersey, New York, Connecticut, Rhode Island, and Massachusetts, in 1968, around 1968. And so, in nature, it would be highly unusual for three brand new pathogens to just show up unless there was some sort of manmade intervention.

So that's the hypothesis of my book. And I go through and present evidence of the development of the tick-borne research program, tick-borne disease research program, accidents that have happened in the past with the ticks, and then Willy's confession and supporting information to that admission that he thought the outbreak was due to a bio weapons release. He never said it was the Lyme bacteria per se. He intimated it was a different bacterium. But that may be why it's been confusing to scientists and we need to look into it now with this new information, and that would speed up our development of diagnosis, treatment and cures.

Related Topic(s): Secret Government, Add Tags
Add to My Group(s)
Go To Commenting
The views expressed herein are the sole responsibility of the author and do not necessarily reflect those of this website or its editors.