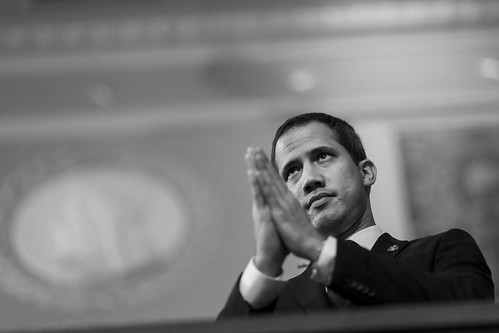 Juan Guaido receives ovation at State of the Union 2020
(Image by The White House)   Details   DMCA
Trump's State of the Union address included one of the most bizarre scenes in the history of our moribund Congress. He introduced Juan Guaido, the incompetent and unpopular politician whom the U.S. government has repeatedly tried to force on the people of Venezuela as their "only legitimate President."Both parties stood up to applaud. Alan Macleod reported in MintPress, that "[Speaker] Pelosi was more enthusiastic even than Vice-President Mike Pence, beating him out of her seat to give Guaidó a standing ovation."

At the beginning of his introduction, Trump had praised Guaido for his brave struggle against "the socialist dictator of Venezuela, Nicola's Maduro." He concluded by asking him to "Please take this message back that all Americans are united with the Venezuelan people in their righteous struggle for freedom." Pelosi again stood up to applause." Trump ended with a solemn warning that "Socialism destroys nations."

A few minutes later, he returned to this theme, linking single-payer health care with what the U.S. is fighting against in Venezuela and everywhere in Latin America. With a combination of menace and lies that reminded me of Joe McCarthy, he warned Congress and the nation that:

"One hundred thirty-two lawmakers in this room have endorsed legislation to impose a socialist takeover of our health care system, wiping out the private health insurance plans of 180 million very happy Americans. To those watching at home tonight, I want you to know: We will never let socialism destroy American health care."

Needless to say, Pelosi and the Democrats didn't applaud at this. Trump had hit them where they were already hurting.

Medicare-for-all is a divisive issue for congressional Democrats. They know that Trump will use the socialist/communist label against them in the general election if they highlight the damage done to our broken medical system by the private, for-profit health-care industry. If Sanders is the nominee, his single-payer plan, together with his anti-corporate banner and his call for massive governmental action to reduce global warming, will likely ignite a Red Scare fueled by the enormous capital of our corporate ruling class.

The moral argument and factual basis for Sanders' program is conclusive. Of course we can afford his single-payer plan! We're already spending that amount of money (public+private) on a dysfunctional system in which 44 million are uninsured and another 38 million are under-insured. The latter regularly forgo needed medical care because they can't afford the ever-increasing deductibles and copays. The population of Ukraine is nearly equal to the number of our uninsured. What would we think if we found out that the citizens of an entire country of that size with a per capita income as high as ours had no health insurance? We would see it as a moral swamp.

To fully appreciate the meaning of Trump's presentation of Guaido during the SOTU, we need to view it from the perspective of the U.S. imperial relationship to Latin America. This, in turn, can help us see the real Power in Congress--one that can cause the legislative body of the greatest military power on Earth to adulate a low-grade political thug such as Guaido. As Trump made clear, it is an international Power: "The United States is leading a 59-nation diplomatic coalition against the socialist dictator of Venezuela, Nicola's Maduro." This coalition even includes Denmark, Finland and Sweden, nations that Sanders cites as examples of what he means by "democratic socialism."

The real Power is a global capitalist empire called the United States, not the one described by the U.S. constitution or elected by the people's vote. This Empire dominates Western Europe and Canada through its global financial heft and administrative control of the international banking system, its enormous military power and its command of NATO. With the consent and cooperation of Western Europe, this Empire treats Latin America and its more than 650 million people as its domain and has, for more than a century, bribed cooperative governments and overthrown the uncooperative ones.

A 'cooperative' government is one that supports U.S. foreign policy, especially in Latin America. It will agree to trade relations that favor the U.S. and avoid domestic policies that reduce the profits of American corporations who exploit cheap labor to extract natural resources from their land. As long as a government is 'cooperative,' it doesn't matter if it's a brutal dictatorship such as the one the U.S. installed in Chile under Pinochet.

1908 saw the beginning of oil exploration in Venezuela that ended with the discovery of what today are the largest oil reserves in the world. This oil has been the focus of U.S. imperial interest for a century. In that same year (1908), the U.S. navy helped Juan Vicente Gómez seize power in Venezuela. His rule lasted until 1935. As John Gunther wrote in his book Inside Latin America, Gomez "made use of tortures of inconceivable brutality; political prisoners, of which there were thousands, dragged out their lives bearing leg irons (grillos) that made them permanent cripples, if they were not hung upside down--by the testicles--till they died." Another prolific torturer supported by our Empire was Marcos Pe'rez Jime'nez (1948-1958), whom the U.S. awarded the military Legion of Merit.

Since the election of Hugo Chavez (Maduro's predecessor) in 1998, the Venezuelan government has become 'uncooperative.' It adopted an independent foreign policy, nationalized industries, redistributed land and used oil revenues for a variety of programs that reduced poverty and enhanced education. Under George W. Bush in 2002, the U.S. engineered a military coup that failed after two days. Since then it has imposed crippling economic sanctions and tried to generate support for a coup by Guaido and his far-right Popular Will party.

How far will the U.S capitalist Empire and its bipartisan ranks in Congress go to suppress the 'uncooperative' agenda of Bernie Sanders?

Related Topic(s): Bipartisan; Democratic Party; Democratic Party Strategy; Democratic Sellout; Democratic Socialists; Democratic Values; Empire; Establishment; Socialism; Trump, Add Tags
Add to My Group(s)
Go To Commenting
The views expressed herein are the sole responsibility of the author and do not necessarily reflect those of this website or its editors.