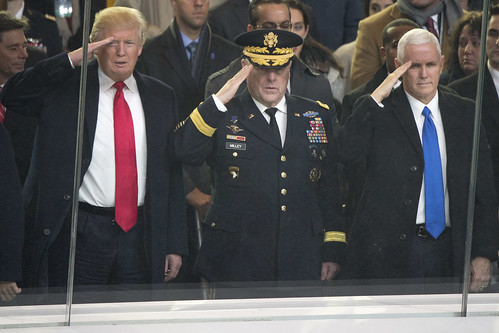 It is often the case that the outcome of events reveals the essential issues underlying political developments. This is true of the conflicts that erupted within the ruling class over the Nazi rampage in Charlottesville, which culminated in the dismissal Friday of Trump's chief strategist Stephen Bannon.

The corporate-controlled media has sought to portray the sequence of events entirely in racial terms, with Bannon and other advocates of "white nationalism" now purged, leaving political control of the White House and the Trump administration in steadier and more "moderate" political hands: a group of generals and ex-generals, headed by White House Chief of Staff John Kelly, together with Wall Street financiers such as Gary Cohn, Trump's chief economic adviser, and Treasury Secretary Steven Mnuchin.

The New York Times has led the way, with an editorial Sunday declaring that "Americans accustomed constitutionally and politically to civilian leadership now find themselves relying on three current and former generals -- John Kelly, the new White House chief of staff; H. R. McMaster, the national security adviser; and Jim Mattis, the secretary of defense -- to stop Mr. Trump from going completely off the rails. Experienced and educated, well-versed in the terrible costs of global confrontation and driven by an impulse toward public service that Mr. Trump doesn't possess, these three, it is hoped, can counter his worst instincts."

In the same edition of the Times, a news analysis celebrates what its headline calls "The Moral Voice of Corporate America." In this account, "a chorus of business leaders rose up this past week to condemn hate groups and espouse tolerance and inclusion."

Among those named as part of this "chorus" of "moral" leaders are such corporate criminals as Jamie Dimon of JPMorgan Chase, one of those responsible for the 2008 financial collapse; Mary Barra of General Motors, who oversaw the cover-up of an ignition-switch defect that killed hundreds of people; and WalMart CEO Doug McMillon, whose company is a synonym for low-wage exploitation.

The ruling elite saw Trump's incautious remarks defending the neo-Nazis who rioted in Charlottesville as a serious threat to the interests of American imperialism abroad as well as the maintenance of social and political stability at home. Powerful corporate interests feared the implications for Trump's agenda of corporate tax cuts, the removal of business regulations, a profit windfall in the guise of infrastructure reform and the gutting of Medicaid and other social programs.

Trump's self-exposure of his efforts to build an extra-parliamentary fascistic base increased the nervousness in financial circles over the danger of a collapse of the speculative bubble that has been built up since the 2008 Wall Street crash.

The response, laid out most clearly by the Times, has been to increase the grip of the military and corporate America over the government to an extent unprecedented in US history. It is 56 years since President Dwight D. Eisenhower, in his 1961 farewell address, warned of the dangers to democracy posed by the rise of the "military-industrial complex." He could have no conception of the size, power and degree of dominance exercised by the vast military/intelligence/corporate complex of today.

The first result of this consolidation was the announcement that Trump will deliver a nationwide address tonight, unveiling plans for an expansion of the war in Afghanistan.

What the ruling elite fears above all is the growth of working-class opposition to the Trump administration and the entire political system. Thus, excised from the official narrative promoted by the media is any reference to the reality of social life in America -- a country in which 20 individuals control as much wealth as the poorest half of the population -- as well as the reactionary agenda of the Trump administration itself. Nor is there any discussion of war and the crimes carried out by "responsible" leaders such as Mattis, who won his appellation "Mad Dog" for his role in destroying the Iraqi city of Fallujah.

This is replaced with a series of diversionary issues, centered on a grossly distorted presentation of the United States as a country seething with racial intolerance and an exaggerated picture of the strength and influence of neo-Nazi and racist forces. Hence, one has the apparently contradictory but in fact compatible phenomena, ubiquitous in the Democratic Party-aligned media, of the promotion of identity politics alongside respectful and even admiring portrayals of the white supremacist thugs who demonstrated in Charlottesville.

Typical was a newsletter released Sunday by the New Yorker under the headline, "White Supremacy in America." In an introduction, David Remnick, author of the hagiographic biography of Obama, The Bridge, proclaims, "Make no mistake: neo-Nazis and white supremacists are now at the forefront of American politics."

Among the featured articles is one by author Toni Morrison titled "Making America White Again," which insists that "Unlike any nation in Europe, the United States holds whiteness as the unifying force." In line with the Democratic Party and its various appendages among the pseudo-left organizations of the privileged middle class, Morrison explains the election of Trump as the product of the racism of "white America":

Patrick Martin writes for the World Socialist Website (wsws.org), a forum for socialist ideas & analysis & published by the International Committee of the Fourth International (ICFI).
Related Topic(s): Big Business; Donald Trump; Military; Military War Strategy, Add Tags
Add to My Group(s)
Go To Commenting
The views expressed herein are the sole responsibility of the author and do not necessarily reflect those of this website or its editors.