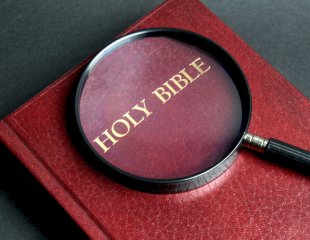 Fort Atkinson School District in Wisconsin has planned a training course for its public school teachers. One of the sessions being offered in the course is Happiness Is - A Biblical Perspective on True Joy.

It's important that this effort to mix religion and government be opposed legally. However, a much more fundamental aspect of this case, and of countless other cases in which efforts are being made to mix religion with government in order to turn the US into a Bible-based theocracy, is the lack of knowledge of the vast majority of people of the evil teachings in the Bible. If people had been made aware of these evil teachings in the Bible, this current issue would never have existed because no one would want anything to do with the Bible. Ignorance of these evil Bible teachings is essential to the success of the Bible-promoting theocrats.

In the case of the Christian course Happiness Is - A Biblical Perspective on True Joy, there is one Bible verse that directly addresses the issue of both happiness and children. Its ungodly and heartless brutality is enough to make any sincere person to, at a minimum, question the claim that the Bible is the word of God, and, hopefully, to make a person realize that not only is the Bible NOT the word of God, but that it is evil and should not be used as a guide on how to live our lives. That Bible verse is Psalm 137:9, which states, "Happy shall he be, that taketh and dasheth thy little ones against the stones."

Many Christians will object that this is from the Old Testament, and that since the arrival of Jesus, the Old Testament and its harsh teachings, laws and commands have been replaced by the grace of Jesus. Based on their own Christian Bible, they are factually wrong.

According to whoever wrote the Gospel of Matthew, Jesus made it clear that he did not come to do away with or replace the ungodly and cruel teachings and commands of the Hebrew Bible/Old Testament. At Matthew 5:17-18 the unknown author of Matthew wrote that Jesus said:

Think not that I am come to destroy the law, or the prophets: I am not come to destroy, but to fulfil. For verily I say unto you, Till heaven and earth pass, one jot or one tittle shall in no wise pass from the law, till all be fulfilled.

The mystery author of Matthew has Jesus saying he came to fulfill Hebrew Bible law and the Jewish prophets. This is because the unknown authors of the Gospels believed Jesus would come back from the dead and reign over the Earth, at which time all would be fulfilled. That never happened. Since heaven and Earth have not passed, based on the above verses, the ungodly and cruel Hebrew Bible/Old Testament laws are still in effect.

One of the many ungodly and repulsive commands found in the Hebrew Bible/Old Testament is Exodus 21:17, which claims God commanded, "And he that curseth his father, or his mother, shall surely be put to death."

The American revolutionary and Deist, Thomas Paine, provided much invaluable teaching material on the Bible. All of Paine's writings on God, Deism, the Bible and religion are found in The Age of Reason, The Complete Edition. I strongly suggest that this book should be used as a study guide in any and all Bible classes in public schools. Since Thomas Paine is one of America's indispensable founders, the religious right should not have any problem with Paine's objective and powerful book.

Deists, and all free thinkers, who want to help people free themselves from the ungodly and harmful teachings of the Bible, and thus remove the threat from the religious right of turning the US into a Bible-based theocracy, need to become familiar with these too-often-overlooked evil teachings from the Bible, so they can then educate sincere people who are currently Bible believers. Our page Protect Children From the Bible is a good source of information to do this. For much more in-depth Deism tools of knowledge about the harmful and evil Bible teachings that need to become common knowledge, we have Deist Reality Cards and our Deism eBooklet series of 50 eBooklets Defending God From the "Holy" Books. Empower yourself with knowledge so you can then empower others. Knowledge truly is power!

Bob Johnson is a paralegal and a freelance writer in Florida. He was raised Roman Catholic, but after reading Thomas Paine's The Age of Reason, he became a Deist. In 1993 he founded the World Union of Deists and in 1996 he launched the first web (more...)
Related Topic(s): Bible; Bible And Politics; Bible-thumping; Brutality; Children; Class; Evil; Freethinker; God; Government; (more...) Happiness; Jesus; Parents; Public Schools; Religion; Rights; School, Add Tags  (less...)
Add to My Group(s)
Go To Commenting
The views expressed herein are the sole responsibility of the author and do not necessarily reflect those of this website or its editors.