Beyond Nuclear Deterrence: A Complementary Protective Approach for Israel

The word "deterrence" comes from the Latin root meaning "fear." In theory, war is deterred by instilling fear in potential enemies. To this end, Israel is said to have amassed tremendous destructive potential - allegedly 200 nuclear warheads. While this arsenal may incite fear in potential foes, the same fear encourages other countries like Iran to acquire nuclear weapons as well, further inflaming regional tensions and hatred. For this reason, no country committed to defense solely through destructive power is likely to generate a trust-based, peaceful atmosphere.

Diplomacy and economic sanctions likewise have not been sufficient to resolve the fear crisis - which is driven by human behavioral dynamics that cannot be controlled by such methods alone.

War and conflict are human problems requiring human solutions. The underlying cause of conflict is accumulated social stress. Therefore, neutralizing this collective stress would reduce the probability of hostilities by easing tensions between competing factions. A technology that accomplished such an outcome would have historic importance.

Today the military of Israel has an opportunity to address this fundamental cause of war by deploying a new, scientifically verified technology of defense beyond nuclear weapons.

A proven new technology of defense is now available, called Invincible
Defense Technology (IDT). This is a technology of national security, fully capable of defending Israel from any destructive technology, including nuclear weapons. The militaries of Mozambique and Ecuador have already applied IDT in order to defuse and eliminate conflict. It was applied by a civilian group in Israel to reduce warfare in Lebanon. Extensive research has confirmed its effectiveness. This new technology is easily implemented, highly cost-effective, and can prevent disruption and attack from outside or from within the country.

This new technology of defense is based upon the latest discoveries in the fields of physics, neuroscience, and physiology. Ultimately, IDT is based on the discovery of the unified field of all the laws of nature - the most fundamental and powerful level of nature's dynamics. Technologies based upon this unified field of natural law have such concentrated power that they can render obsolete and irrelevant every objective technology and destructive means of defense.

Modern science has probed deeper levels of nature's functioning, from the macroscopic world of classical physics to the world of the atom, then to the underlying field of the atomic nucleus, and then to the subnuclear levels. This exploration has culminated in the description of the unified field, the unified source of the diversified laws of nature governing the universe. From its purely self-interacting dynamics, the unified field creates from within itself all the particles and forces that compose the universe, and all the diversified streams of natural law governing the nuclear, atomic, molecular, and macroscopic levels. Because the unified field is vastly more powerful concentrated energy than any other level of nature's dynamics, any technology of defense based upon the unified field is of historic importance.

Some might worry that IDT could be unsafe. The development of nuclear power has threatened humankind with nuclear conflagration and has cast a shadow over the safety and security of the whole world. Fortunately, there is no danger to humankind from IDT, which is a technology of the unified field. A technology of the unified field operates at the basis of the laws of nature governing the universe - a completely unified and holistic level of nature's functioning. Because this level of natural law is holistic, it is naturally free of the negative, unanticipated side effects that accompany technologies based upon fragmented levels of natural law, such as nuclear weaponry.

The discovery of the unified field is a scientific development of the foremost order - a rigorous mathematical development based upon the Lagrangian of Superstring Field Theory, a highly compact mathematical formula that describes the self-interacting dynamics of unity at the basis of all the diverse laws of nature governing the universe. A technology based upon this complete, most comprehensive level of nature's functioning is completely different from and vastly more powerful than defensive technologies based upon diversified levels of natural law - nuclear technologies, chemical technologies, biological technologies, electronic technologies - because these all utilize specific laws of nature in isolation. The nature of the unified field and it technologies reveals that invincibility in nature is available only at this superunified level. 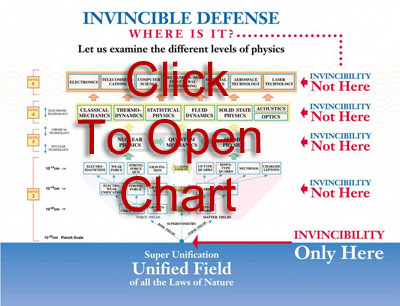