In early 2010 WWII veteran Jerry Yellin was introduced to a young man, Dory Klock, an eight-year Army veteran who had fought in Bosnia. Dory was having difficulty adjusting, keeping a job, and fighting drugs and alcohol. As a combat veteran, Jerry knew these inner struggles all too well. Dory's wife and two daughters were suffering with him, and Dory's mom Lin, Jerry's friend, was beside herself. Then one day Lin called and asked Jerry if he could help her out. "Sure, Lin, anything," he told her.

She began weeping; she couldn't speak. Finally, she asked, "Can you help me put Dory's medals and ribbons on his dress uniform? We want to bury him in it, Jerry. He committed suicide yesterday." Lin brought Dory's uniform to Jerry's home and he put the medals and insignias in place. When Lin left, Jerry broke down. His thoughts ran wild with the suffering so many are experiencing from the life and death of our warriors who experience combat and have nothing to hold onto when they come home. Jerry was a P-51 Pilot who flew 19 missions over Japan and saw the horror of Iwo Jima - a battle involving 90,000 soldiers on a small island where 28,000 people died. He knew from his own experiences as a returning veteran who suffered from what is now called Post-Traumatic Stress Disorder (PTSD) that the problem is overwhelming our nation.

Jerry relates: "Can we expect our warriors to return from the horrors and experiences of war and integrate back into a normal routine without something deep and meaningful to hold onto? I could not. And neither can they. I also know that each and every PTSD victim needs a vehicle, a methodology that will help them help themselves. Anti-psychotic and antidepressant drugs are used extensively but are extremely costly, especially for the long haul, and do not provide a cure. Many turn to alcohol and recreational drugs as a temporary escape from problems. Eighteen veterans from all our wars are said to be committing suicide daily. I know that care is dependent on complete willingness and cooperation from the patient. And that takes a long time. America does not have that time now. We are in crisis."

This article offers a scientifically verified, time-tested solution to how we can help our military personnel, veterans and their families.

On the behalf of The David Lynch Foundation's Operation Warrior Wellness, Veterans like Jerry are urging DoD and VA officials to add a different modality to their treatment programs for PTSD, one which has already been extensively scientifically validated to reduce stress - the Transcendental Meditation - (TM) technique.

TM involves a simple, non-religious, psycho-physiological practice, demonstrated in over 600 research studies to reduce a wide variety of stress-related problems. It is practiced twice a day for twenty minutes and is so easy to learn that anyone who can think a thought can to do it. The TM technique carries one's awareness to a profound level of rest, clears out deep-seated stress, and revitalizes frazzled nervous systems. Meta-analysis published in peer-reviewed journals provide more evidence for the superior effectiveness of the TM technique over other practices in the areas of anxiety reduction, reduced high blood pressure, self-development, physiological relaxation, improved psychological outcomes, and decreased use of drugs, alcohol, and cigarettes.

Research shows all meditation practices are not the same. In recent studies these practices have been classified into three categories: Focused Attention, Open Monitoring, and Automatic Self-Transcending. Techniques in the Focused Attention category are techniques requiring concentration. Those forms of meditation show brain activity associated with focusing - fast EEG called gamma (20-50 Hz). Techniques in the Open Monitoring category include mindfulness or Vipassana. They are reported to activate brainwaves associated with internal mental processing - theta activity (4-8 Hz). Techniques in the Automatic Self-Transcending category transcend their own procedure - take the attention out of thinking, analyzing, controlling, or watching to a state of pure consciousness. The Transcendental Meditation technique is in this category. During TM synchronous alpha1 (8-10 Hz) activation is seen primarily in frontal executive areas as well as over the whole brain, indicating integrated functioning of the brain.

Different meditation techniques use different procedures, have different effects on brain functioning, and so lead to different benefits. The more focused the meditation procedure, the more focused the effects. Techniques of concentration such as Zen are found to activate attentional centers. Another technique in this category, Loving-Kindness Compassion, actives emotional centers of the brain. Techniques of Open Monitoring such as Vipassana are reported to decrease pain perception and have a small effect on anxiety. TM, a technique in the Automatic Self-Transcending, is reported to have a wider range of effects, perhaps owing to the experience of pure consciousness underlying all thought activity. For instance, meta-analyses report that TM practice results in higher levels of self-actualization and greater decreases in anxiety than other meditations. In the bigger picture, research on TM practice reports significant effects on psychological measures - improved moral reasoning, creativity, cognitive flexibility, coping and problem solving, improved health - reductions in blood pressure and in hospitalization, and significant improvement on social interactions.

The TM technique is also different because it turns one's attention inward to experience deeper levels of thought, until one goes beyond active thought and the mind comes to a state of complete inner rest. But the mind is alert. There is an inner wakefulness, and a feeling of calm and peace. This is the state of restful alertness. The brain functions with significantly greater coherence and the body gains deep rest.

Research shows that the deep rest gained during TM practice is more profound than deep sleep. This allows the body to rid itself of deeply rooted stresses, especially the stress associated with traumatic conditions like PTSD. For instance, a peer-reviewed, random assignment study on Vietnam veterans who practiced TM (Journal of Counseling and Development, 1985: (64); 212-215), found that the technique effectively influenced the neurobiological aspects specifically affected by PTSD. The University of Colorado School of Medicine researchers demonstrated that TM practice had positive effects on symptoms associated with PTSD: instruction in the technique, followed by three months of regular TM practice, significantly reduced emotional numbness, anxiety, startle response, depression, alcohol consumption, insomnia, and family problems. The TM group also reported improvements in sleep and obtaining/keeping employment. Seventy percent of the TM practitioners reported that they no longer required the services of the veteran's center.

In a new pilot study (under review), Iraq and Afghanistan veterans experienced a 50% drop in PTSD symptoms by the fourth week of TM practice, and even greater improvements by two months and three months. This study is summarized in Jerry Yellin's new book The Resilient Warrior: Healing the Hidden Wounds of War (2011) with Dr. Sarina Grosswald.

But even with impressive results like this, critics might argue that military personnel would not be willing to practice the TM technique. Initially this might be the case, but the results of the practice speak for themselves. Those concerned that a perceived "machismo pushback" for meditation may prevent military personnel and veterans from learning to meditate should think back through history to great examples of alert, ready and finely tuned warriors. The ideal might be martial arts experts like the samurai. They represented the total integration, the total union, of mind and body - quick, clear thinking combined with a precise strong body, working as one. This intimate connection between mind and body is now beginning to be rediscovered in several militaries in Latin America. For instance, an Ecuadorian General was very receptive to the concept and decided to have his warriors instructed in the TM technique on 8 March 2010. As a test case, the General selected two units from training centers where young soldiers received their six months' basic military training before they were sent to operational units. Each training unit had 300 soldiers who were taught the TM technique, and 200 among them who became advanced experts. The General set the time and place for the soldiers to practice their meditation program in a group in accordance with their duty routine.

After one month of practice, a test was done together with military psychologists in order to check the validity of the TM program. Here is a summary of the warriors' statements: 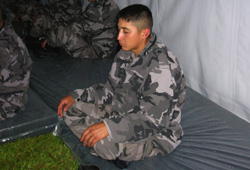 (Image by Unknown Owner)   Details   DMCA
Wounded and traumatized military as well as healthy military personnel need - and deserve - every opportunity to regain and/or sustain their health. Research also shows that practitioners of the TM technique rise to a higher level of health. For instance, a 1987 study in Psychosomatic Medicine, a mainstream medical journal, monitored for five years the medical care utilization of 2,000 people who regularly practiced the TM technique. The findings: 50 percent fewer doctor visits and hospital admissions than non-meditators of comparable age, gender, profession, and insurance terms.

Related Topic(s): Army; Consciousness; Depression; Healing; Health; Meditation; Military; PTSD; Relaxation; Science; (more...) Stress; Suicide; Veterans; Veterans, Add Tags  (less...)
Add to My Group(s)
Go To Commenting
The views expressed herein are the sole responsibility of the author and do not necessarily reflect those of this website or its editors.