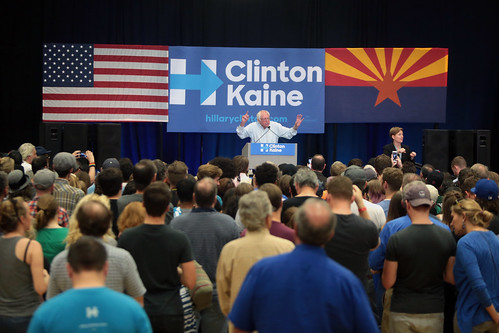 Recently, Keeanga-Yamahtta Taylor, former leader of the self-destructed faux-left group, the International Socialist Organization, was giddy hailing Bernie Sanders and his reform-the-Democratic-Party bandwagon. She alleges, "Sanders linked the possibility of ending capitalist oligarchy to a 'political revolution' that calls on the many to stand up to the few." She claims Sanders calls for "a complete transformation of the country." "He named capitalism as the culprit and democratic socialism as a solution." "What a breathtaking turn of events," she adds.

Her silliness aside, Sanders again tellingly addressed the gross inequalities and abuses the working class endures in this society controlled by the corporate elite. Sanders advocates for Medicare for all, free higher education, $15-an-hour minimum wage, affordable housing, dramatically higher taxes on the rich and their corporations, for the need to combat climate change, the end to mass incarceration. In his speech, he advocates for a 21st-century Economic Bill of Rights, a direct challenge to the neoliberal austerity measures pushed by the two corporate parties. He outlines programs that most US people want - issues where the trade-union leadership, if it were doing its job, would be leading the charge. Yet his speech was clearly one to rally people to vote Democratic and defeat the evil Republicans, a speech pushing people to once again to believe in this never-say-die pipe dream of reforming the Democratic Party.

Read in full - and well worth reading - Sanders' speech, not Taylor's embellishment of it, is not an attack on capitalism but on "unfettered capitalism." Sanders presents himself as a Democrat in the FDR liberal tradition (or myth). He makes the social changes he advocates contingent on working inside the Democratic Party to achieve them. Trying to build "democratic socialism" outside of the Democratic Party is verboten - as he already made clear in his 2016 full endorsement of Ms. 1%, Hillary Clinton, for president. Sanders is due for a repeat performance in 2020.

Sanders also makes clear his loyalty to imperial foreign policy, as dictated by the DNC-RNC-national security state, in his demonization of Russia and China, his ambivalent record on constant US regime-change operations and military invasions, and on Israeli apartheid. His speech says nothing about the Pentagon war budget, the US being the world's largest weapons manufacturer and arms dealer, making up 36% of the world's military exports.

Sanders and many of us need regular reminders of the real FDR. Did FDR conceive of himself as a democratic socialist? Not exactly: FDR argued to his corporate business critics who criticized his New Deal that "I am the best friend the profit system ever had." In his 1936 campaign speeches he proclaimed himself the "savior" of "the system of private profit and free enterprise." [1]

FDR's New Deal only reduced unemployment from 13 million to 9 million, meaning 70% of the unemployed stayed unemployed. And most blacks were ineligible for the New Deal programs, being farm laborers, tenant farmers, domestic workers.

FDR referred to Haitians as "little more than primitive savages," in 1933 called Mussolini "that admirable Italian gentleman," said Nicaragua's "Somoza is a son of a b*tch, but he is our son of a b*tch," as if the US owned not just him, but the country. [2]

When the Chicago police in 1937 shot ten strikers in the back during a peaceful rally, the Memorial Day massacre, FDR responded, "a plague on both your houses," as if the victims shared equal blame for these police murders.

FDR fought legislation that would protect black citizens from being lynched by criminal gangs of whites. Despite appeals and protests, he maintained the racial segregation of the US armed forces throughout World War II.

He imposed a trade embargo on Spain during the Spanish Civil War, blocking aid to the legitimate government while General Franco's fascist forces fighting it received military aid from fascist Germany and Italy, thereby helping to ensure Franco's victory.

FDR refused to lift immigration restrictions on European Jews fleeing the Nazis, including blocking the ship St. Louis, with a thousand Jewish refugees, from entering a US port in 1939. By being forced to return to the countries they fled, Roosevelt sent a message to Jews around the world.

During World War II his government refused to act on the Jewish request to bomb the rail tracks to Auschwitz, even though Allied bombers flew right over them.

In 1942 110,000 Japanese-Americans, three quarters of them born here, were thrown in prison camps, without any warrants, hearings or indictments being issued. Even those with 1/16th Japanese blood were subject to this indefinite imprisonment. FDR's abuse of Japanese-Americans was worse than anything Trump is doing at the border. Trump is not acting against actual US citizens as FDR did, nor is he jailing over 100,000, nor is Trump making them lose their wealth.