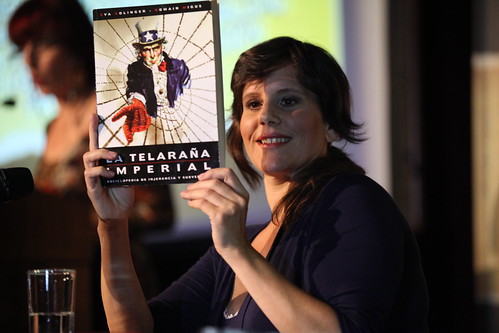 Eva Golinger, 'What is not known about NGO's'.
(Image by Cancillera Ecuador)   Details   DMCA

As the class struggle heated up in Venezuela this year, fueled by interventionist threats by the pro-US Organization of American States (OAS) bloc, many former supporters of the Bolivarian revolution have remained sitting on the fence. Fed up with these fair-weather friends and their critiques which recycle corporate news propaganda, some defenders of Venezuela such as Shamus Cooke , Greg Wilpert , Maria Paez Victor , have come with articles clarifying the stakes and calling the so-called "left" to account.

Among the disaffected is Venezuelan-American lawyer Eva Golinger, the author of The Cha'vez Code: Cracking US Intervention in Venezuela and self-described friend and advisor to Hugo Cha'vez.

The day after Trump threatened to militarily intervene in Venezuela, Jeremy Scahill posted his interview with Eva Golinger on The Intercept, one reinforcing some corporate press distortions of Venezuela under President Maduro. Golinger hardly goes as far in this anti-Maduro campaign as Scahill, who more clearly fits what Shamus Cooke characterized as "the intellectually lazy "pox on both houses" approach that has long-infected the U.S. left."

To her credit, Golinger does emphasize the real class issue ignored by "pox on both your houses" liberals like Scahill: Washington's and the Venezuelan right-wing's goal is to crush the heart and backbone of the Chavista revolution, "the grassroots, the social movements, the workers, the community organizers, the people who are actually the ones trying, struggling to hold on to anything that's left of this movement that they have been building and empowering themselves with now over the past fifteen years or so."

And, counter to claims of Maduro "authoritarianism," she correctly notes in her recent article,

"Imagine if protestors were to use lethal weapons against security forces in the U.S., even killing some of them. In Venezuela, the anti-government protestors have even burned innocent bystanders to death because they suspected them of being 'chavistas'. Were that to happen in the U.S., the repression and forceful action by the state would far exceed the leniency exercised by the Venezuelan government in the face of these deadly demonstrations."

"The demonstrations arose from the massive discontent throughout the country as food shortages, lack of access to medications, skyrocketing inflation and erosion of democratic institutions have intensified since Maduro won office by a slim margin in 2013."

In fact, the violent demonstrations arose as part of a coordinated effort by OAS General Secretary Luis Almagro, the US government, and the rightwing MUD opposition to generate a chaos in the streets that demanded OAS "humanitarian intervention' to restore order and displace the Maduro government. While there is massive discontent due to food and medication shortages and inflation, those most affected by this, the working classes and poor, are not the ones participating in the anti-government protests.

2. Golinger defends Attorney General Luisa Ortega, ["the judicial maneuvering by the country's highest court to silence critics should cease."] who was eventually removed by unanimous vote of the Constituent Assembly after recommendation by the Supreme Court. The issue was not simply being a critic; Ortega had failed to prosecute violent protesters and their financial backers, and lied to the public.

3. Golinger says "they [the Maduro government] even gave over a half a billion dollars to Trump's inauguration fund." This is clearly wrong, as has been pointed out on the article's comments section. PDVSA gave $500,000 to Trump inauguration. Yet Golinger and the Intercept do not correct this.

"A growing number of Venezuelans who supported Hugo Cha'vez and his policies have distanced themselves from his successor, dismayed by the country's turn from a once vibrant participatory democracy towards a closed one-party state, intolerant of critics."

She, as with other fair-weather friends, sees a divide between the Maduro and Chavez eras, when in fact the fundamental problems of oil dependence, corruption, bureaucracy existed throughout this period, in part overshadowed by Chavez' charisma and high oil prices.

That the majority of opposition MUD parties are participating in the coming October regional elections clearly proves Venezuela is not a "one-party state, intolerant of critics."

5. She writes "President Maduro's convening of a constituent assembly to rewrite the nation's constitution has been vehemently rejected by the opposition and has caused severe internal rifts within his own movement."