The senator turned in a robust debate performance and finished the night with the news that he will be endorsed by Alexandria Ocasio-Cortez, Ilhan Omar, and Rashida Tlaib. 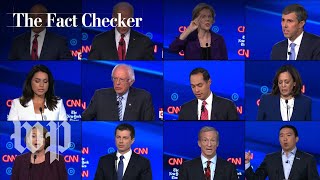 Toward the end of the second hour of a long and often unfocused Democratic debate on Tuesday night, Vermont Senator Bernie Sanders elbowed his way into a discussion about the opioid crisis and the drug war.

"We're moving on, Senator," said moderator Erin Burnett, who signaled that she wanted to open a discussion about the health and age of the front-running contenders for the Democratic nomination. Burnett said, "I want to start with you, Senator," and it was clear she wanted to discuss the heart attack that had sidelined the 78-year-old senator for two weeks.

"I'm healthy, I'm feeling great," said Sanders, "but I would like to respond to that question."

New Jersey Senator Cory Booker jumped in to note that "Senator Sanders is in favor of medical marijuana. I want to make sure that's clear, as well."

"I do," said the senator from Vermont, without missing a beat. "I'm not on it tonight."

The crowd laughed and applauded, and Burnett relented. "Go ahead and finish your point, and then I'll ask my question, Senator."

With that, Sanders tore into the issues raised by the opioid crisis, delivering a message that reminded everyone who was listening of why he remains an absolutely necessary contender in the 2020 race:

"Let's take a deep breath. Take a look at this opioid epidemic. You have executives, CEOs of major pharmaceutical companies, making tens of millions of dollars a year. And in this particular case with the opioids, they knew that they were selling a product to communities all over this country which were addicting people and killing them. And last year, the top 10 drug companies made $69 billion in profit. This is what unfettered capitalism is doing to this country. And it's not just the drug companies. Right now, the CEOs in the fossil fuel industry know full well that their product is destroying this world. And they continue to make huge profits. That is why we need a political revolution that says "enough is enough to this behavior."

Related Topic(s): Bernie Sanders; Bernie Sanders Endorsements; Bernie Sanders Presidential Campaign; Health; Heart; Marijuana, Add Tags
Add to My Group(s)
Go To Commenting
The views expressed herein are the sole responsibility of the author and do not necessarily reflect those of this website or its editors.