DISCLAIMER: The proceeding essay is entirely the work of satirist and self-appointed political pundit, CJ Hopkins, and does not reflect the views and opinions of the Consent Factory, Inc., its staff, or any of its agents, subsidiaries, or assigns. 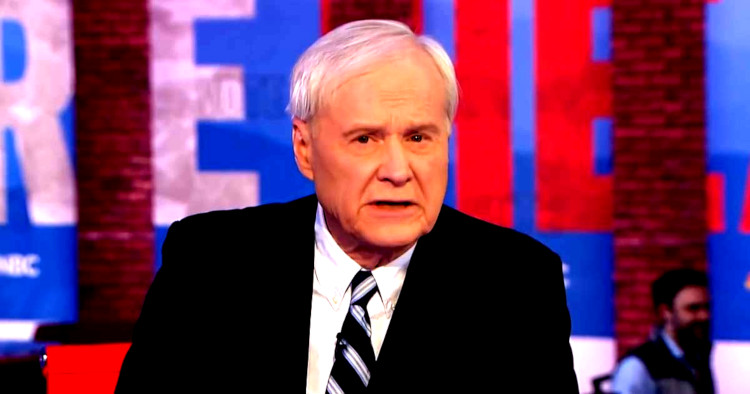 Chris Matthews goes off the rails
(Image by The Consent Factory)   Details   DMCA
America just can't catch a break. After three long years of brutal oppression under Donald Trump's Russia-backed Nazi Reich, it turns out the only Democratic candidate with a chance of unseating him in November and rescuing the world from the Putin-Nazis is a 78-year-old bloodthirsty Commie with a Khmer Rouge-like army of kill-crazy followers.

Yes, I'm afraid the rumors are true. Apparently, elements of Jeremy Corbyn's recently-disbanded Nazi Death Cult have regrouped in the United States, formed an alliance with Bernie Sanders fanatics, and together this Mega-Commie Kill Swarm is roaming the Internet with complete impunity, sadistically mass-murdering Sanders critics and defenseless differently-abled persons with vulgar language and vicious poo-memes.

The corporate media are doing their best to alert Americans to the imminent threat. CNN broadcast a special report explaining how Sanders' "army of supporters" are "bullying" and "frightening" his critics into silence. An "outspoken Elizabeth Warren supporter whose daughter with Downs syndrome is recovering from cancer" was verbally-abused to within an inch of her life. An "activist dying of ALS" was instructed to go "f___" himself. The Working Families Party was subjected to a series of inappropriate adjectives. The Party's leader, an African American and a personal friend of Bernie Sanders, was taunted with a racist Tweet, which Sanders took to Twitter and condemned, but by that time it was much too late. His Commie Kill Swarm was beyond his control; they started tweeting memes comparing Elizabeth Warren to a snake and Pete Buttigieg to a rat, and otherwise terrorizing the American public.

Senior Investigative Correspondent Drew Griffin spoke to several other "victims" of Sanders' Commie Kill Swarm's tweets who are recovering from their Internet traumas in undisclosed secure locations and so insisted on remaining anonymous. According to Griffin, these emotionally-traumatized victims are so emotionally traumatized by what they experienced on the Internet that they wouldn't even let him describe the traumatic "circumstances" surrounding their "attacks."

And the proof of Sanders' Commie Kill Swarm's atrocities isn't just anecdotal. No, Griffin also spoke to Ben Decker, "CEO" of something called "Memetica" (which appears to be Ben's Twitter account), whose "Facebook analysis" conclusively proves that Sanders has a lot of online supporters, more than all the other candidates, which creates "the potential for greater harm." This type of online "bullying-at-scale," according to Ben, is just " well, "crazy."

Of course, CNN is not the only corporate media outlet on the case. In the days leading up to the Iowa caucuses (which Sanders would go on to attempt to steal from Buttigieg by winning thousands more votes), a spate of dire warnings were issued. According to The Washington Post, "Sanders supporters have weaponized Facebook" and are terrorizing people with "angry memes." The New York Times reported that "Bernie Sanders and His Internet Army have forced progressives who refuse to back him into hiring private security details to protect them from "death threats" and off-color jokes. Daily Beast warned of "Toxic Bernie Bros." NBC likened them to MAGA supporters, who everyone knows are Russia-loving Nazis. SNL writers went even further, painting Sanders as the darling of 4chan " and these are just a few examples.

But by far the most bombastic display of unbridled Sanders-Commie-Kill-Swarm-Panic was MSNBC's Chris Matthews, who totally lost it after the last debate and started sputtering about "socialists" staging public mass-executions in Central Park. Matthews is apparently firmly convinced that Sanders, if he wins the election, plans to dress up like Fidel Castro, march Matthews and his cronies out onto the Great Lawn, and go full-bore Daenerys Targaryen on them. He sat there, trembling, on national television, eyes afire with paranoia, jabbering about the godless "Reds" like a scene from Kubrick's Dr. Strangelove that got cut because it was too over-the-top.

Seriously, though, I doubt he has much to worry about. Regardless of who wins the election this year, the supranational corporatocracy that essentially owns the U.S. government is not about to let Bernie Sanders implement the same basic social programs that most capitalist countries throughout world have provided to their people for decades. Jesus, just imagine the freedomless horror if Americans could go to university, and, you know, maybe raise a child or two, without spending the rest of their lives in debt! Think of the suffering that would inflict on the banks, and insurance companies, and military contractors, not to mention the pharmaceutical industry. God help America, should it go down that road! The next thing you know there'd be high-speed trains, subsidized art, and un-chlorinated chicken " there's no telling where the nightmare would end.

Look, I don't normally get invested in the quadrennial Simulation of Democracy, but I'm kind of pulling for Bernie this time. I don't believe he has a chance, but if he somehow managed to outfox the Democrats and win the nomination this summer, it would be fun to watch as the corporate media and the rest of the neoliberal Resistance react to a Sanders vs. Trump election.

Not that either Sanders or Trump, the men themselves, are a threat to the empire (as we have witnessed over the course of the last three years). But we're in the middle of a War on Populism, which the global corporatocracy needs to win if it is going to continue to relentlessly destabilize, privatize, and restructure everything, as it has been doing since the end of the Cold War. Sanders and Trump are just symbols, of course, lightning rods for "populist" anger " but they are symbols the empire needs to destroy in order to reestablish "normality."

The neoliberal Resistance's ham-fisted efforts to prevent a Bernie Sanders nomination are desperate attempts to avoid a scenario where they are forced to ensure Donald Trump's reelection, which, make no mistake, they will do if they have to. (Jonathan Chait has already whipped up some boilerplate to be used in that effort.) They did it to Corbyn, and they will do it to Sanders, but it is likely to get extremely awkward, pretending to reluctantly support him (because the alternative will be a man they've spent the last three years accusing of being a Russian spy and literally Hitler) while simultaneously painting him as a genocidal commie terrorist whose supporters are a bunch of white supremacist, billionaire-butchering neo-Maoists.

Thus the "Sanders Swarm" hysteria, and the Iowa caucuses "technical difficulties," and whatever other propaganda and dirty tricks the Resistance has planned to prevent a Sanders nomination, so they can lose to Trump with a non-populist candidate and play "Resistance" for another four years.

So, unless you relish the thought of that, or the thought of watching a humiliated Bernie obsequiously shuffle around the country campaigning for Buttigieg, like he did for Clinton, please do what you can to get him nominated, so we can enjoy a Pol Pot vs. Hitler election.

Do it for purely entertainment purposes. It is mostly just a show, after all.

***If, for whatever inexplicable reason, you appreciate Mr. Hopkins' work and would like to support it, please go to his Patreon page  (where you can contribute as little $1 per month), or send your contribution to his PayPal account , so that maybe he'll stop coming around our offices trying to hit our staff up for money. Alternatively, you could purchase his satirical dystopian novel,  (more...)
Related Topic(s): Bernie Or Bust; Bernie Sanders; CNN; Chris Mathews, Add Tags
Add to My Group(s)
Go To Commenting
The views expressed herein are the sole responsibility of the author and do not necessarily reflect those of this website or its editors.