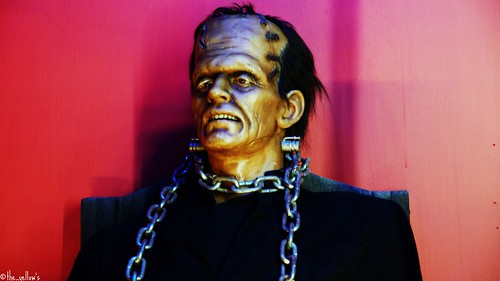 [DISCLAIMER: The proceeding essay is entirely the work of our in-house satirist and self-appointed political pundit, CJ Hopkins, and does not reflect the views and opinions of the Consent Factory, Inc., its staff, or any of its agents, subsidiaries, or assigns.]

So here we go. Like a 1960s straight-to-drive-in Hammer Film Production, the 2020 campaign season has begun. Dig into your bucket of popcorn, pop the flap on your box of Good & Plenty, turn off your mind, and enjoy the show. From the looks of the trailer, it's going to be a doozy.

That's right, folks, it's the final installment of the popular Trumpensteinhorror movie series, TRUMPENSTEIN MUST BE DESTROYED!It will be playing, more or less around the clock, on more or less every screen in existence, until November 3, 2020; or until Trump takes that lonely walk across the White House lawn to the Marine One chopper and flies off to Mar-a-Lago in disgrace.

Here's a quick recap of the series so far, for those who may be joining us late.

When we last saw Trumpenstein he was out on the balcony of the White House South Portico in his Brioni boxers, ripped to the gills on Diet Coke and bellowing like a bull elephant seal. Having narrowly survived the Resistance's attempts to expose him as a Russian intelligence asset (and the reanimated corpse of Adolf Hitler), he was pounding his chest and hollering angry gibberish at the liberal media like the Humongous in the second Mad Max movie.

The liberal mob was standing around with their torches and pitchforks in a state of shock. Doctor Mueller, the "monster hunter" had let Trumpenstein slip through his fingers. The supposedly ironclad case against him had turned out to be a bunch of lies made up by the Intelligence Community, the Democratic Party, and the corporate media.

Russiagate was officially dead. The President of the United States was not a Russian secret agent. No one was blackmailing anyone with a videotape of Romanian prostitutes peeing on a bed where Obama once slept. All that had happened was, millions of liberals had been subjected to the most elaborate psyop in the history of elaborate deep state psyops " which, ironically, had only further strengthened Trumpenstein, who was out there on the Portico balcony, shotgunning Diet Cokes with one hand and shaking his junk at the mob with the other.

It wasn't looking so good for "democracy."

Fortunately, even though Russiagate had blown up in the Resistance's faces and Trumpenstein could no longer be painted as a traitorous Russian intelligence asset (or as Vladimir Putin's homosexual lover), he was still the reanimated corpse of Hitler, so they went balls out on the fascism hysteria, which kept the Resistance alive through the summer.

Which was all they really needed to do. Because these last three years were basically just a warm-up for the main event, which was always scheduled to begin this autumn. Russiagate, Hitlergate, and all the rest of it " it was all just a prelude to these impeachment hearings, and to the mass hysteria surrounding same, which the global capitalist ruling classes, the Intelligence Community, and the corporate media will be barraging us with until November 2020. The details don't really matter that much. They were always going to impeach him for something, and they were always going to do it now, and throughout the 2020 campaign season.

You do not honestly believe they are going to let him serve a second term, do you? He took them by surprise in 2016. That isn't going to happen again. Seriously, take a moment and reflect on everything we've been subjected to since Hillary Clinton lost the election; the unmitigated insanity of it all. The Russiagate hysteria. The Russian hacker hysteria. The Russian Facebook mind-control hysteria. The Hitler hysteria. The mass fascism hysteria. The anti-Semitism hysteria. The concentration camp hysteria. The white supremacist terrorism hysteria. Russian spy whales. Perfume assassins. The endless stream of fabricated "news" stories pumped out by the corporate media. Best-selling books, based on nothing. Comedians singing hymns to former FBI directors on national television. Celebrities demanding CIA coups. Papers of record like The New York Timescoordinating blatant propaganda campaigns. The list goes on, and on, and on.

All of this because one billionaire ass clown won an election without their permission?

No, this was never just about Donald Trump, repulsive and corrupt as the man may be. The stakes have always been much higher than that. What we've witnessed over the the last three years (and what is about to reach its apogee) is a global capitalist counter-insurgency, the goal of which is (a) to put down the ongoing populist rebellion throughout the West, and (b) to crush any hope of resistance to the hegemony of global capitalism; in other words, a War on Populism.

Not that Donald Trump is a populist hero. Far from it. Trump is a narcissistic clown. He has always been a narcissistic clown. All he really cares about is seeing his face on television and plastering his name on everything in sight, preferably in huge gold letters. He got himself elected president by being cunning enough to recognize and ride the tsunami of populist anger that was building up in 2016, and that has continued to build throughout his presidency. It is not going away, that anger. The Western masses are no more thrilled about the global capitalist future today than they were when they voted for Brexit, and Trump, and various other "populist" and reactionary figures.

***If, for whatever inexplicable reason, you appreciate Mr. Hopkins' work and would like to support it, please go to his Patreon page  (where you can contribute as little $1 per month), or send your contribution to his PayPal account , so that maybe he'll stop coming around our offices trying to hit our staff up for money. Alternatively, you could purchase his satirical dystopian novel,  (more...)
Related Topic(s): Impeachment; PsyOps; Trump, Add Tags
Add to My Group(s)
Go To Commenting
The views expressed herein are the sole responsibility of the author and do not necessarily reflect those of this website or its editors.